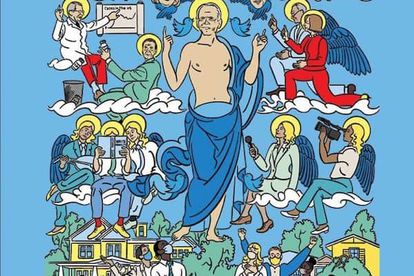 The American socialist quarterly’s new cover features newly-inaugurated US President Joe Biden with a halo around his head, a seraphic-like Obama, the Clintons, with angelic killer drones hovering.

The cover of the winter edition of Jacobin, which was previewed hours after Biden was sworn in as the 46th US president, mercilessly mocks the US’ habit of treating its politicians as demi-gods.

Taking the next logical step, the American socialist quarterly reimagines the new president as the Messiah, drawing on imagery from traditional Christian iconography.

Biden’s larger-than-life bare-chested figure is shown surrounded by the ‘holy spirits’ of the Twitter bird.

The image also shows kneeling Democrat leaders in the US Congress, US coronavirus czar Dr. Anthony Fauci, fawning journalists, and ‘adherents’ eagerly consuming the ‘holy scripture’ which according to one netizen is probably the latest Barack Obama memoir.

The former president himself is shown as a six-winged seraph sandwiched by the likewise angelic Hillary and Bill Clinton, with the trio gazing benignly from the ‘heavens.’

A crowd of mask-wearing suburban laymen on Earth celebrates Biden’s ascension to the throne, but no one else is.

A pair of Reaper drones complete the picture… You get the picture, right?

A CNN host saw a vision of the president-elect’s arms embracing America in the lighting of the Lincoln memorial, while a New York Times editor confessed to experiencing chills upon Biden landing at the Joint Base Andrews.

One could be excused for interpreting such accounts as quasi-religious.

“The folks at Jacobin (a socialist magazine) say their new cover is satirical. But I fear that in America we are coming perilously close to the worship of the secular state,” tweeted Michael W Nicholson.

The New Columbia Movement was not impressed though, tweeting: “This magazine cover by Jacobin is blasphemous and a grave offence to all Christians.”