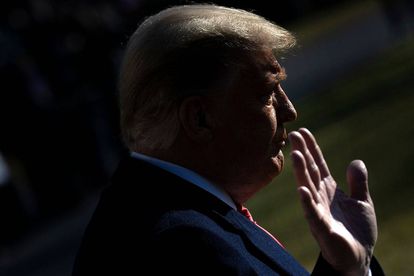 US President Donald Trump walks to Marine One on the South Lawn of the White House on January 12, 2021 in Washington,DC before his departure to Alamo, Texas.
Brendan Smialowski / AFP

US President Donald Trump walks to Marine One on the South Lawn of the White House on January 12, 2021 in Washington,DC before his departure to Alamo, Texas.
Brendan Smialowski / AFP

While America and much of the world gears up for a Joe Biden presidential inauguration like no other, we have to wonder what Donald Trump will be doing in his last hours in office and beyond.

Before we get there though, we need to address the fact that Wednesday’s inauguration is one in a million, so to speak. Why? Well, there’s an unprecedented COVID-19 pandemic which has altered bits of the procession, to say the least, and on top of that, Trump will not attend the inauguration of his successor, which according to reports, has not been done in more than 150 years.

Also, the inauguration comes just days after a deadly riot whereby Trump protestors stormed Capitol Hill. It also comes days after Trump was impeached — not once — but twice and given the boot by Facebook and Instagram.

Well, according to the president’s diary, Trump and The First Lady Melania will depart the White House at 8:00 on Wednesday morning — 15:00 SA time.

At 11:00 — 18:00 SA time — Trump and Melania are expected to arrive at Palm Beach International Airport in Florida. While Trump won’t attend the inauguration, there are reports that departing Vice President Michael Pence will be in attendance.

“Pence has chosen to welcome the incoming president rather than join a planned send-off for Trump earlier in the morning at Joint Base Andrews where the departing president will climb aboard Air Force for one final trip to his Mar-a-Lago estate in Palm Beach, Florida,” USA Today said.

WHAT COMES NEXT FOR THE DEPARTING PRESIDENT?

Due to the extremely dramatic developments which played out in recent weeks, we can’t be sure what Trump will do publicly after the inauguration but according to USA Today, he has spoken about another presidential race in 2024.

It did go on to mention one thing that would most likely be on his agenda though….something along the lines of preparing a defence for a Senate impeachment trial on charges of inciting an insurrection.

The Wall Street Journal reported on Tuesday that Trump also had discussions about the formation of a new political party named The Patriot Party. While further details are scarce at the moment, it is no doubt a bid to continue spreading his influence after leaving the White House.

In his farewell address to the nation on Tuesday 19 January, Trump said the following;

“Now, as I prepare to hand power over to a new administration at noon on Wednesday, I want you to know that the movement we started is only just beginning. There’s never been anything like it. The belief that a nation must serve its citizens will not dwindle but instead only grow stronger by the day.”