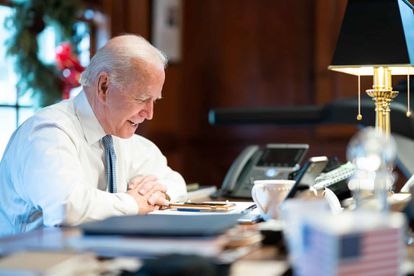 After Donald Trump’s four contentious years in the White House, America will be hailing to a new chief on Wednesday. President Joe Biden will now take the reigns, on an Inauguration Day that will be defined by the impact of the pandemic, and the immediate security threats to the Capitol itself. We’ve got the live stream here, but what time does it all kick-off?

What time does the inauguration of Joe Biden start?

Biden, a 78-year-old former vice president and longtime senator, will take the oath of office at noon local time on the US Capitol’s West front, the very spot where pro-Trump rioters clashed with police two weeks ago before storming Congress in a deadly insurrection. That’s 17:00 GMT, and more importantly, it’s 19:00 for us here in South Africa.

Official Washington has taken on the dystopian look of an armed camp, protected by some 25,000 National Guard troops tasked with preventing any repeat of this month’s attack. with the pandemic raging, the general public is essentially barred from attending the swearing-in, leading to unprecedented optics: an empty National Mall on Inauguration Day.

[Live stream will appear here before 19:00 SAST, depending on what time inauguration proceedings begin]

What will Donald Trump do next?

The outgoing POTUS is set to depart the White House for the final time on Wednesday morning. He will fly down to one of his properties in Palm Springs, Florida, and a round of golf is almost certainly on the cards this week.

Although his immediate future remains unclear, Trump’s long-term future is already causing a stir. Some sources say he is willing to start a new political party – called the Patriot Party – to run in 2024.

For Joe Biden, however, the work begins today. He has vowed to start his administrative duties as soon as the inauguration has finished. ‘Healing and unification’ will feature heavily in his speech, as the new president inherits what remains of a divided and fractured nation.

“It’s hard sometimes to remember, but that’s how we heal. It’s important to do that as a nation. The last year has tested us in unimaginable ways, but now it’s time we begin to heal and overcome — together. We don’t have a second to waste when it comes to tackling the crises we face as a nation. That’s why after being sworn in [on Monday] I’ll get right to work.”

“Our Administration will lead with science and scientists — with a CDC and NIH that are free from political influence, a Surgeon General who is independent and speaks directly to the people, and an FDA whose decisions are based on science and science alone. Experts say wearing a mask from now until April will save more than 50 000 lives.”

And finally… What does inauguration mean?

Every four years, this question becomes one of the most Googled searches on the web. An inauguration is the beginning or introduction of a system, policy, or period. It’s a term used to describe the formal admission of someone to office – like a president – and broadly refers to the ceremony which marks the occasion. Okay, see you all again in 2024…