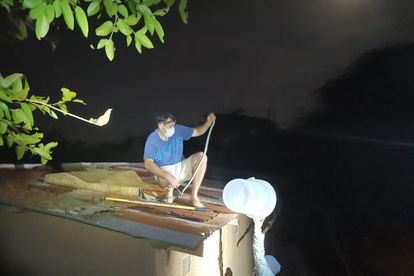 THE TWO SMALL FEMALES TOGETHER WERE UNUSUAL

Evans said it was a challenging yet fun rescue.

“Small mambas usually prove to be the most tricky to catch, and these two certainly did not make life easy for my wife and me.”

He said the residents were a big help to them.

“I think we were called out at around 9, but it took ages to get them, so we got home at 12ish.

Evans added that the very small gaps and the beams kept them hidden.

“It’s actually been my quietest winter in terms of mambas. Usually, it’s a little busier as it’s the mating season. But we’ve had an exceptionally cold winter.”

He said to find two small females together is unusual.

“I’ve never had that. Perhaps the roof was a winter retreat!”

Evans said the black Mambas do well in the greater Durban area because there are lots of suitable habitats, plenty of rats because humans can be messy, and there are plenty of feral cats.

He furthermore said they are common in many parts of the country.

ALSO READ: Five venomous snakes you might spot on a Cape Town hike

“Durban is famous for them because they’re encountered so often, but that’s because there are so many humans around their habitat.”