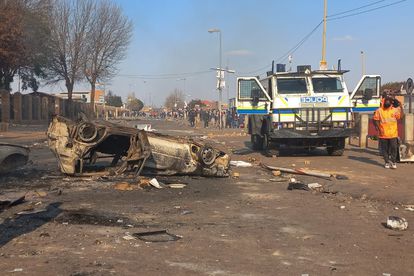 Tembisa residents have been told to continue with their protest against the high electricity bills despite a meeting scheduled for Friday.

Residents of the community took to the streets in violence on Monday afternoon, demanding to meet with Ekurhuleni mayor Tania Campbell over their disputed utility bills.

A WhatsApp voice note is doing the rounds on Monday night alerting residents that the strike continues.

In the voice note, a man says the instruction for the protest’s continuation comes from the Tembisa Community Forum (TCF).

But residents are urged not to loot local businesses.

“The strike continues tomorrow. One important point to raise is, please, do not loot because if you loot our stores, where will we buy bread?… A voice note came in from one of the Tembisa [Community] Forum members who said the strike continues up until we meet with the mayor on Friday”

Two more bodies were found on Monday evening following the protests in the area. Two others were killed in the afternoon.

According to the Independent Police Investigative Directorate (IPID), a police nyala fired rubber bullets at protestors who had barricaded the road with rocks and burning tyres.

But live ammunition is also reported to have been used, said spokesperson Lizzy Suping.

Ekurhuleni mayor Tania Campbell and some of her MMCs met with the Tshwane Community Forum on Monday.

This came after residents of Tembisa demanded her presence, claiming she has been ignoring them.

But according to another circulating voice note, this time apparently from the Tembisa Community Forum, the meeting with the Campbell and her team will continue on Friday morning.

The meeting will happen at Mehlareng Stadium at 09h00.

“We spoke about a lot of things today but we told them we want answers on Friday on our grievances.”