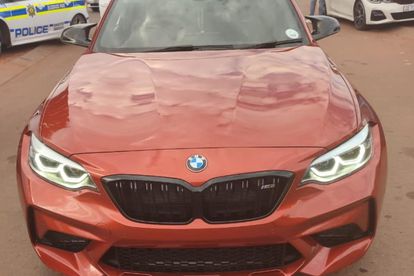 A suspect was nabbed after he was found in possession of a stolen BMW M2 in Zakariya Park.

SUSPECT NABBED IN ANOTHER REGION OF JOBURG

The Johannesburg Metro Police Department (JMPD) spokesperson, Xolani Fihla confirmed the arrest of the 47-year-old in the south of Johannesburg.

He added that the owner was notified of his missing vehicle.

“He immediately activated the vehicle’s tracking device and opened a case of theft at Honeydew SAPS,” he said.

He further explained that officers followed the vehicle’s tracking signal, which led them to Zakariya Park.

“One male fitting the description seen on the footage was found together with the stolen BMW and a White Volkswagen Polo used in the commission of the crime.

The male suspect was immediately arrested and detained at Lenasia South SAPS.”

SUSPECT DUE TO APPEAR IN COURT SOON

According to Fihla, the suspect is due to appear in court during the course of the week.

“Both vehicles were seized by the officers and booked in at the SAPS Lenasia pound for verification,” he said.

This success follows the recovery of a White KIA Pegus JMPD K9 Unit on 28 July.

The vehicle was hijacked in Edenvale and it was recovered in Alexandra.

The vehicle was seized and booked in at the SAPS Aeroton pound.