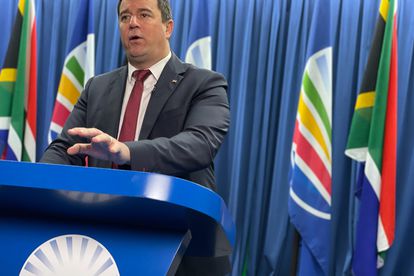 The Democratic Alliance (DA) leader John Steenhuisen is expected to brief the public on what they claim is an unlawful ousting of Johannesburg Mayor Mpho Phalatse.

STEENHUISEN TO RESPOND TO LOSING JOHANNESBURG

On Thursday evening at 18h15, DA leader Steenhuisen is expected to deliver a live address on the removal of their mayor Phalatse.

The party says the voting of the motion of no confidence was illegal, said DA spokesperson Richard Newton.

“The DA believes that what transpired today in the City of Johannesburg was unlawful and unprocedural. DA leader Steenhuisen will announce the party’s next steps in this regard.”

Phalatse was quickly replaced by ANC chairperson Dada Moreno as the newly elected mayor of Johannesburg.

The motion was brought by the ANC and received support from the EFF, the Patriotic Alliance and other parties.

GAUTENG DA TO GO TO COURT AGAINST ELECTION OF NEW MAYOR

Gauteng DA leader Solly Msimanga described the events in the special council meeting as a “tragi-comedy”. This is because the Speaker ignored procedural protocol to hasten the vote despite an urgent court application by the DA to interdict the meeting.

“Unfortunately, the Speaker’s tactic worked and the motion was carried before the court action could be concluded. It was evident for all to see that the Speaker had a political agenda that she would push through, without any regard for the rules of the house.”

But the battle of the city is not over. The DA will continue with its court action to prevent the election of the new mayor.

“[And to] ensure that this railroad tactic by the Speaker and her allies is brought to a halt and sanity prevails,” Msimanga said.

Msimanga is talking about recently appointed Speaker and Cope member Colleen Makhubele. She received majority votes in council to replace DA’s Vasco Da Gama. Da Gama was also ousted through a motion of no confidence.

“If it wasn’t so serious, it would be laughable,” Msimanga said, speaking of the events that led to Phalatse’s ousting.

ALSO READ: ‘I will not be resigning,’ says Joburg Mayor Mpho Phalatse

Sandra and Theo evicted from #BBTitans