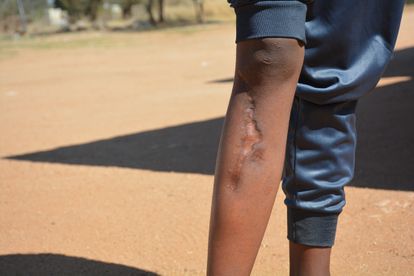 Olebogeng, who is now 15, suffered a traumatic injury during a school soccer match in 2018. Image: Facebook/Public Protector.

Olebogeng, who is now 15, suffered a traumatic injury during a school soccer match in 2018. Image: Facebook/Public Protector.

A boy in the North West is able to walk again after he suffered a horrific injury during a school soccer match and a botched surgery thereafter. He had to use crutches for two years but is now able to walk unaided.

The Public Protector said the boy’s mother, Kelebogile Mziphula, is relieved that her 15-year-old son can move independently again.

“Miss Kelebogile Mziphula, 41, of Mocoseng village in Mahikeng was distraught in March 2018 when her football enthusiast son, Olebogeng, was carried off a soccer field with a severely fractured shin on his right lower leg and unable to walk following a hard tackle,” said the Public Protector.

Olebogeng was injured while playing for his former school, Thuto Botshelo Primary, against a rival school when he picked the injury, which was so severe his shin bone was fragmented and out of place.

After the injury, an unnamed teacher took Olebogeng to Mahikeng Provincial Hospital, where he was later admitted, and the school principal gave the family just over R1000 to cover some of the costs.

Mziphula said the school did nothing else to help her son and the North West education department also refused to take responsibility for the incident.

“On the afternoon of the soccer match in question, I got a call from the teacher informing me that my son had been injured and that they were on their way to hospital. I then called Olebogeng’s father, who went to investigate,” Mziphula said.

“On arrival at hospital, the father told me the injury was horrifying. He later told me that soon after his arrival, the teacher left the hospital. At the time I needed maternity care as I had a new-born and had to constantly ask Olebogeng’s aunt to sleepover at the hospital since he needed assistance with bathing and going to the rest room. He couldn’t walk.”

When Olebogeng’s aunt was unable to help him, his older sister – who was in Grade 11 at the time – went to his aid and reportedly spent days at the hospital and missed school.

Eventually, Olebogeng underwent an urgent operation and his fractured shin was pieced together with screws and wires.

However, a few days after he left the hospital, the family found that the surgery was botched – the site of the fracture swelled and turned septic and Olebogeng was in excruciating pain.

The boy attempted to make his way to school but the 12-kilometre trek was all but impossible on crutches with an infected wound and the pain was unbearable, according to the Public Protector. He missed classes and his marks dropped.

Mziphula reached out to Olebogeng’s father and asked him to help pay for corrective surgery at a private hospital in Mahikeng.

“The operation focused on stopping the bleeding and treating the infection. This time the procedure was a resounding success,” said the Public Protector.

With her son on the road to recovery, the mother set her sights on the Department of Education and the school and she was determined to hold them accountable.

Mziphula alleged undue delay and/or failure on the part of the education department to properly attend to her complaints about her son’s injury. She furthered that the school’s principal refused to take responsibility for the ordeal or help with medical expenses.

“[The principal] allegedly told her the school could not assist in the absence of her son’s father and kept her out of the school premises.

“In addition, Ms Mziphula alleged that [the principal] persuaded her late junior brother to sign a letter exonerating the school from liability without her consent as Olebogeng’s mother and legal guardian,” said the Public Protector.

The Public Protector’s investigation found that the school failed to follow proper procedures with obtaining permission from Mziphula for her son to participate in sporting activities.

It was also found that the school and department failed to take “proper steps” to attend to the mother’s complaint.

“Although the department took Olebogeng to hospital, no steps were taken to see to it that Ms Mziphula’s subsequent complaint was responded to appropriately.

“The Public Protector directed the department administrator, Mzwandile Matthews, to take steps to intervene and to ensure that the systems and mechanisms are put in place to guarantee that complaints are diligently responded to.”

Matthews – who is the head of the education department’s administration – was instructed to ensure that various parts of the department come to Mziphula’s aid and that the matter is finalised.

When officials from the Public Protector’s magazine visited the family recently, Olebogeng’s leg had fully healed and he could walk without crutches again. However, his leg was not as straight as it was before the injury.

The officials also heard that the leg aches where it was operated on when the weather is cold. On the bright side, Mziphula indicated that she was free from distress.