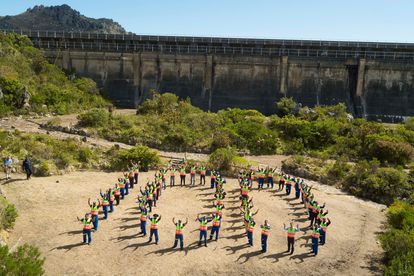 A photo of workers in front of the Steenbras lower dam in Cape Town. Photo: City of Cape Town

A photo of workers in front of the Steenbras lower dam in Cape Town. Photo: City of Cape Town

The Steenbras Lower Dam turned 100 years old on Friday. The iconic Cape Town dam was the major source of water to the Cape Town CBD. It was also the first major dam that was built, after several smaller ones were built on top of table mountain. Since its construction in 1921, the dam remains the main supply source for Strand, Somerset West, Newlands and Wynberg reserves. On top of all of that, the dam helps the city avoid stages of load shedding.

City of Cape Town Mayor Geordin Hill-Lewis marked the 100 year anniversary by unveiling a special plaque. The plaque came with some big-budget news and promises to find the “next Steenbras” project.

“Steenbras dam is a timely reminder to us to not shy away from big, ambitious infrastructure projects that will serve generations of Capetonians to come. Cape Town must always be building and investing to support the growth of the city. So let’s push ourselves to ask: what is the ‘Steenbras’ project of today that will help prepare for what Cape Town will be a century from now? What are we doing now that will be celebrated in 100 years’ time?”

Hill-Lewis then revealed that an additional R50 million a year will be allocated to Steenbras for repairs and maintenance.

Fast facts and electricity from water

There are two Steenbras dams. The lower and upper dams have a combined storage volume of over 65 000 MI. To put that into perspective, 1MI (megalitre) is 1 million litres of water. The Steenbras Dams are also part of the electricity pumped storage scheme that provides Cape Town with hydro-generated electricity.

In rainy conditions, when the Steenbras Upper Dam is 100% full, the water overflows into the Lower Dam. When the Upper Dam is not full, there is also a connecting pipe from the Upper to Lower Dam. This allows water transfer to take place.