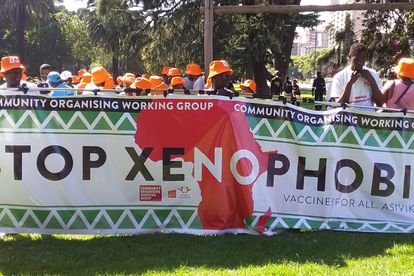 It’s the battle of several parties and movements in the Johannesburg CBD today. From Operation Dudula and its members targeting “illegal foreigners”, to the EFF. Everyone wants to have their own take on jobs and crime in the country. A group looking to call out xenophobia is now making its own voice heard. The Kopanang Africa Against Xenophobia group has been leading a protest march across Johannesburg. As other groups joined its march, it seems some tensions with the EFF boiled over.

EFF flags go up in smoke at anti-xenophobia march

Hundreds of South Africans gathered at the Pieter Roos Park on Saturday morning, before the march got underway.

A heavy police presence has been following the march. The group handed over memorandums at the Hillbrow and Johannesburg Central Police Station. They want SAPS to fully enforce the country’s laws to stop vigilantism and ensure foreign nationals are protected.

The Kopanang group has been joined by trade union giant SAFTU, as well as members of the Workers and Socialist Party. Several students also joined the march to show their support

With so many groups joining the march, some protesters took it upon themselves to set fire to an EFF flag.

While the EFF flag burning is likely to attract waves of attention, the march itself has been praised in response to Operation Dudula.

A SAFTU representative told members of the media

Tensions are likely to continue for the remainder of the weekend. There are also fears that xenophobic violence may spread to Durban. Police in the area have sent out a warning for foreign nationals and their safety.