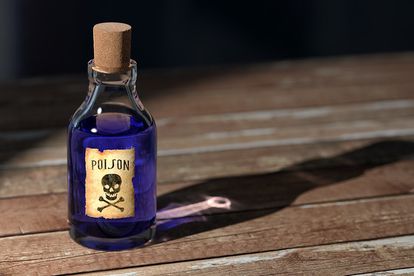 Two men died after reportedly consuming what was believed to be soft drink. Image via Pixabay/qimono

Two men died after reportedly consuming what was believed to be soft drink. Image via Pixabay/qimono

Two men have died while the third was admitted to hospital in Limpopo after they allegedly consumed a substance offered to the surviving victim by an unknown motorist on Thursday 11 August 2022.

According to police, it is reported that the survivor, aged 55, was amongst job seekers in Rabe street at about 09:00 in Mokopane, Limpopo when an unknown man driving a white motor vehicle stopped next to them and asked him if they were looking for a job. The man allegedly gave him bread and a 2L bottle half-filled with a red substance which was apparently assumed to be soft drink. He thereafter drove off.

On arrival at Extension 14, Mokopane, his younger brother identified as Klaas Muvhalo aged 50 and the other man identified as Thabo Thlako aged 36, drank the substance but he only consumed a bit of it. The two became highly intoxicated.

ALSO READ: Alleged robber shoots himself after being chased by community in Limpopo

Limpopo police spokesperson, Motlafela Mojapelo said Klaas’s condition deteriorated and he was taken to hospital where he died in the early hours of Saturday. Thabo was later found dead in a house at about 10:00 on Saturday too.

“The survivor also started complaining about stomach aches and was taken to hospital where he was admitted.

“The police were called and immediately commenced with preliminary investigations. The registration numbers and the type of motor the man was driving are still unknown at this stage.”

Limpopo Police Commissioner, Lieutenant General Thembi Hadebe said the police handling these  cases must fully probe the circumstances that led to the deaths of the two men without making any presumptions on the cause of death.

Two cases of inquest were opened. The post-mortem will be conducted to determine the cause of death.