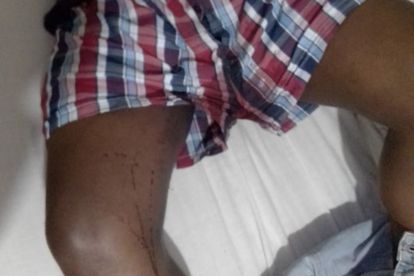 A wife allegedly dragged her husband by his private parts until they started bleeding. Image: Facebook.

A wife allegedly dragged her husband by his private parts until they started bleeding. Image: Facebook.

KwaZulu-Natal Social Development MEC, Nonhlanhla Khoza has called for the arrest of a female police officer who allegedly beat her husband up until his private parts were bleeding and has been abusing him.

The female police officer from Durban, KwaZulu-Natal (KZN) has been abusing her husband for quite some time, allegedly. It is also alleged that the man had to apply for a protection order after his wife injured his private parts.

The KZN Department of Social Development has dispatched a team of social workers to provide psycho-social support to the husband following his brutal assaults for years.

MEC Khoza said incidents of gender-based violence should not be tolerated regardless of who is involved.

Khoza added that it is quite unfortunate that even people entrusted with the responsibility to implement the laws to end the scourge of GBVF end up being involved in violation of human rights.

“It just doesn’t make sense that this police woman allegedly abused her husband and believed that she could not face the law. Although police officers are entrusted with the law, they are not above the law in this country.

“Since this man came forward to detail the abuse he had suffered for years at the hands of his wife, we want to see the law take its course. The claim that this man has been suffering beatings for some time calls for a proper investigation.”

In an interview with Ukhozi FM on Monday, 15 August, the man said they have been married for twelve years. He confirmed the abuse and that he and his wife have not been sleeping in the same room for the past 3 years. He added that he is worried that the abuse is affecting their child with special needs.

According to the husband, the abuse has been reported to both their families but continues unabated. He also revealed that his wife had hit him with a firearm on the forehead, causing an open wound.