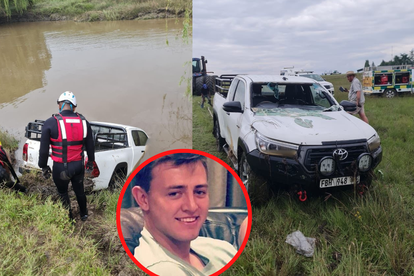 We’ve got all the latest news stories and headlines in South Africa you really need to know on Wednesday, 23 November.

The body of the missing 29-year-old Willem Kruger was found in his submerged bakkie in the Vaal River on Tuesday afternoon.

For the second time in 16 months, Jacob Zuma could be forcibly taken back to jail – and the DA is demanding a swift arrest.

A patient who was in a critical state and believed to be a criminal was allegedly killed inside an ambulance in Atteridgeville, Tshwane.

In transit VIP protector who died after being involved in Deputy President David Mabuza’s motorcade crash has been identified.

A Bloemfontein DJ and music producer SurgeSA Kagisho has claimed that he has surrendered his four-legged friend Pitbull due to recent tragedies.

The body of the missing young man, Willem Kruger, was found in his submerged bakkie in the Vaal river on Tuesday afternoon.

Sakkie Louwrens from Bushveld Crime Investigations said the bakkie was found about 100 metres from the spot where they found bakkie tracks earlier.

The 29-year-old Willem went missing more than a week ago when he left Morgenzon in Mpumalanga. He never reached his destination in Groblersdal in Limpopo.

John Steenhuisen has issued an ultimatum to South Africa’s law enforcement officials. He is demanding that Jacob Zuma is arrested by 17:00 on Friday – and he’s set a 48-hour deadline for Correctional Services to confirm their intentions.

It was ruled yesterday that Msholozi would have to return to prison to complete a 15-month jail sentence after he was irregularly granted medical parole.

Warrant Officer Thomas Shongwe has been identified as the member who sadly died in the motorcade crash in which one of the vehicles forming part of Deputy President David Mabuza’s convoy overturned in Mpumalanga on 20 November 2022.

While traveling between Mpumalanga and Gauteng, one of the backup vehicles for Deputy President, David Mabuza’s motorcade suffered a burst tyre, causing the vehicle to roll over.

Gauteng residents have been urged not to take the law into their own hands and hinder operations of the emergency medical personnel after a patient was allegedly killed during a mob justice incident while inside an ambulance.

The incident happened on Monday, 21 November at Mshongoville informal settlement in Atteridgeville, Tshwane.

MTN customers were left frustrated on Tuesday after a massive data outage left users without internet services or access to fixed-LTE networks.

Twitter was flooded with complaints from numerous unhappy MTN customers across the country.

According to MyBroadband, MTN confirmed a fault in its network and apologised to customers.

Deadline Day: Live updates and all the PSL transfer talk