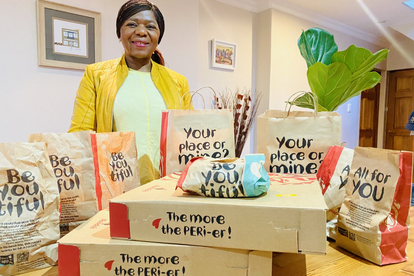 We’ve got all the latest news stories and headlines in South Africa you really need to know on Tuesday 31 August 2021.

We get it, Nando’s may be too spicy for many palates and when the fast food outlet targeted the mythical “Tembisa 10” and author of this work of fiction, Piet Rampedi in it’s latest advertising campaign, it proved too hot to handle for many supporters of the Independent Media journalist.

Enter Thuli Madonsela into the fray, who laughed at the the advert so much it stirred her cravings for some spicy chicken. Madonsela’s wish came true when the former public protector was greeted with a knock on her door and a feast of grilled chicken waiting for her.

However, the grilling didn’t end there. Madonsela endured a heap of criticism from Rampedi and his supporters who took offence to her capitalising on the controversial moment, labelling her a “sell out”.

‘You sold us out for Nando’s’: SA grills Thuli Madonsela for spicy craving

This weekend popular fast food restaurant Nando’s decided to get some free marketing by sending former public protector Thuli Madonsela some Nando’s after she tweeted how much she was craving it.

Surprisingly, not many South Africans were happy for her and soon both she, “Tembisa 10” journalist Piet Rampedi and Nando’s were trending on Twitter.

The former South African Public Protector, Professor Thuli Madonsela is seemingly one of the lucky people who tweet about their cravings and then suddenly finds her wish being granted.

She recently headed online to tweet about her hankering for some Nando’s chicken and lo and behold, she got a whole bunch of meals sent her way by the quick-thinking marketing team who saw an opportunity to trend again.

No vaccine, no R350 grant? SASSA moves to clarify ‘misinformation’

SASSA has dismissed claims that they are implementing a ‘no vaccine, no R350 grant’ policy – as suggested by several fake news articles this week. The agency has slammed those behind the propagation of ‘false information’.

“The information [featured in an accompanying screenshot] is false and does NOT come from SASSA. COVID-19 vaccination is not part of the special COVID-19 SRD grant application criteria.”

The looming prospect of mandatory vaccination to access some services is being punted in South Africa, as officials attempt to encourage more citizens to get their jabs. As it stands, around 23% of the population is fully immunised, and as the vaccine rollout continues, this number needs to get above 70% before we can consider ending lockdown.

The Limpopo Health Department unleashed a wave of controversy last week, when they proposed that liquor traders should have the right to refuse service to unvaccinated citizens. The regional government believe they are prioritising the health and rights of a majority of South Africans, but critics have labelled the brainwave as ‘authoritarian’.

Grandson of Walter and Albertina Sisulu succumbs to Covid-19

The grandson of South African stalwarts Walter and Albertina Sisulu, Moyikwa Sisulu, has passed away from COVID-19 related complications.

He was the eldest son of the late anti-apartheid activist and businessman, Zwelakhe and Zodwa Sisulu.

The 41-year-old Sisulu was an African National Congress (ANC) activist and businessman who his family has described as a man of integrity.

The ANC said in a statement recently that it is mourning the death Sisulu.

“Our revolution has lost a loyal and disciplined servant.

“Death has robbed the people of South Africa of one of its finest sons who was dedicated to economic transformation and the reconstruction and development of our country.”

A 50-year-old motocross rider is fighting for his life after a freak accident at a popular track in Bronkhorstspruit.

“Paramedics arrived on the scene to find the man had been ejected over his handlebars, suffering spinal cord injuries.”

Advanced life support intervention was needed to stabilize him before he was airlifted to a nearby hospital for immediate definitive care.

Eastern Cape Police have opened a case of culpable homicide against Nelson Mandela Bay Executive Mayor Nqaba Bhanga, in the wake of a road accident that claimed two lives and landed him in hospital.

“Algoa Park detectives are investigating a culpable homicide, after two people were fatally injured in a collision, between two vehicles, late on Saturday evening, August 28, 2021. It is alleged that at about 11.30pm, at the intersections of St Leonards Drive and Uitenhage Road, two vehicles, a grey Audi and a navy blue Mercedes Benz, collided with each other,” said Sandra Janse Van Rensburg.

“Both occupants, identities still unknown (male and female) in the Audi died on the scene and the alleged driver of the Mercedes-Benz is currently in hospital,” she added.

The mayor’s spokesperson Leander Kruger said his injuries were far more serious than what was initially reported in the media, adding that Bhanga underwent surgery on Sunday afternoon after suffering some internal bleeding, as a result of the accident.

Teenage pregnancy in SA: ‘It is a national crisis,’ says Motshekga

Basic Education Minister Angie Motshekga has expressed her concern over the alarming teenage pregnancy rate in the country and its impact on the sector.

This brought focus to teenage pregnancies not only in Gauteng, but across the country.

“Let us be clear that it is not just a problem of Gauteng, it is a national crisis. Most of these teenagers are of school going age. It is a serious indictment on all of us as a society and we really need to reflect deeply on this crisis and take urgent action to arrest the moral decay,” Motshekga said in a media briefing in Pretoria on Sunday, 29 August 2021.