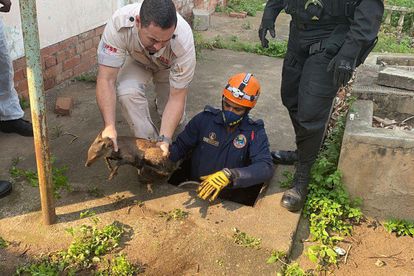 It is the middle of the week and we could all do with some GOOD news. A duiker who was trapped in a manhole in Tongaat, KZN on Tuesday was rescued.

IT WAS NOT CLEAR HOW LONG THE DUIKER WAS STUCK

According to IPSS Medical Rescue, the rescue happened on Tuesday morning.

“IPSS together with the Umhlali K9 Search and Rescue Unit, responded to Tongaat for a trapped animal.

“On arrival, it was reported that a Duiker had fallen down a manhole on an unoccupied property. The animal was trapped with no means of escape.”

IPSS said members from Umhlali K9 SAR entered the void and located the animal before carefully bringing it to the surface.

“The Duiker appeared to be uninjured, and it was taken to a suitable vegetated area, where it was safely released.”

Earlier this month, a beautiful black labrador named Sushi was recently rescued after being trapped in an underground drainpipe in Fairlands, Johannesburg.

Once rescued, Sushi was examined and evaluated by a vet who was on-site before she was allowed to go home with her owner.