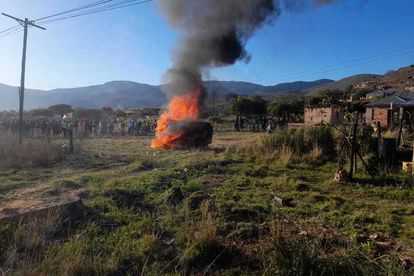 Two men were burnt to death by a mob after they allegedly robbed a woman. Image: SAPS.

Two men were burnt to death by a mob after they allegedly robbed a woman. Image: SAPS.

Community members have been cautioned to desist from engaging in acts of vigilantism and mob attacks after the brutal murder of two suspected robbers in Siloam outside Thohoyandou in Limpopo on Wednesday 17 August 2022.

The two men were reportedly stoned to death and their bodies burnt by community members at Tshavhalovhedzi village under Siloam policing area.

SUSPECTED ROBBERS BURNT TO DEATH BY MOB IN LIMPOPO

According to police, reports suggest that three suspects allegedly robbed a 23-year-old woman of her cellphone and other belongings at a local Plaza. They then attempted to kidnap her in full view of the bystanders but hastily left her and drove off after she screamed for help.

Limpopo Police Commissioner, Lieutenant General Thembi Hadebe condemned the incident and said the tendency of some community members to take the law into their own hands will be dealt with mercilessly and those responsible will be hunted down and brought to book.

Police have urged anyone with information about the suspects who allegedly took the law into their own hands should contact the Station Commander Lieutenant Colonel Adziambei Nemavunde on 0724517554 or crime stop number 0860010111 or nearest police station or May send the information via MySAPS App.

TVET FACILITATOR BURNT TO DEATH BY A COMMUNITY

Recently, a TVET Facilitator in Limpopo was allegedly burnt to death by community members after he was suspected of stealing goats. However, it was later discovered that the deceased who is originally from KwaZulu-Natal (KZN) would buy goats in Limpopo and sell them back home in KZN.