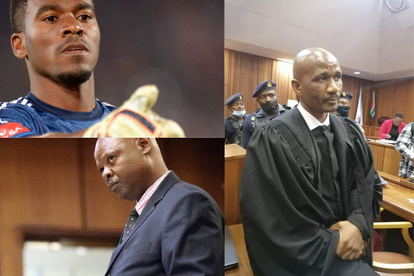 The Senzo Meyiwa trial is expected to resume at the Pretoria High Court on Monday, 6 June after it was postponed on Friday due to State witness, Sergeant Thabo Mosia’s ill-health.

Mosia is expected to be in the witness box  unless he is still unwell, another witness will be brought in to testify. Here are the key highlights from last week’s proceedings.

HIGHLIGHTS FROM THE SENZO MEYIWA TRIAL

Startling statements were made last week at the Pretoria High Court which took centre stage.

Mosia said a witness will be brought in to testify that even the firearm that Meyiwa was shot with came with Sello “Chicco” Twala’s son, Longwe.

Mosia, who is a forensic officer and was among the first to arrive at the crime scene said he did not do a prime residue test to determine if any of the people in the house may have shot Meyiwa.

During his cross examination he said he now believes he should have done it because it would have assisted the court and it does not take long.

The forensic officer also told the court that some evidence was stored in a safe at his office one weekend and was only submitted to the downloading clerk the following Monday. This was a new revelation as it does not form part of any of his affidavits that he wrote regarding the case.

Defence lawyer, Adv Teffo revealed that there is a second docket on the murder of Meyiwa.

He revealed that the Director of Public Prosecutions at the South Gauteng local division wanted to pursue a case against all the seven people who were in the house when Meyiwa was murdered.

Teffo said according to the indictment, the relevant people who are supposed to appear before the court are:

He also told the court that the above named people were accused of murder and defeating the ends of justice.

Adv Teffo told the court that a witness will come and testify that Meyiwa died at the scene. He was rushed to hospital so his body could be dumped at the mortuary.

In previous interviews Kelly Khumalo said “Senzo died in my arms”. Meyiwa’s childhood friend, Tumelo Madlala also said the former goalkeeper died in his arms. It’s not clear whether this was at the scene, on their way to the hospital or at the hospital.

Mosia said the delays in reporting Meyiwa’s murder may have caused the crime scene to be contaminated.

Mosia reportedly arrived 4 hours after the incident. He also alleged that the late Major-General Ndlovu did not give him the address to Kelly Khumalo’s home. He instead was told to go to Botshelo Hospital where Meyiwa was reportedly “rushed” in an attempt to “save his life”.

ALSO READ:  Is Zandile Gumede the eyewitness who will testify in the Meyiwa trial?