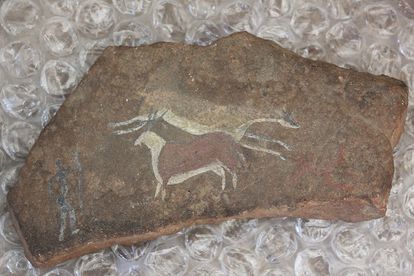 Police have arrested a man for allegedly being in possession of stolen San Rock Art. Photo: SAPS

Police have arrested a man for allegedly being in possession of stolen San Rock Art. Photo: SAPS

A KwaZulu-Natal South Coast man who has taken art theft to another level allegedly attempted to sell a piece of San Rock Art on social media sites.

He was granted police bail ahead of his upcoming trial in the Port Shepstone Magistrate’s Court.

The 48-year old man was expected to appear in court on Monday but his trial was delayed for further investigation to obtain expert evidence police spokesperson Lieutenant Colonel Philani Nkwalase said.

Nkwalase said the Hawks Serious Organised Crime Investigation team in Port Shepstone and the SAPS K9 unit had swooped on the man for allegedly illegally trading in an archaeological item in contravention of the National Heritage Resources Act 25 of 1999.  He allegedly attempted to sell the art on Facebook and other websites.

“The Hawks team reacted on information received about a suspect who had advertised a San Rock Art for sale on social media in the South Coast area. A search warrant was executed on the premises in Montague road in Sea Park which led to the arrest of the suspect in possession the San Rock Art on Thursday,” he said.

Nkwakase said the suspect had been granted R1000 police bail.

“The matter which was expected to be heard in court today was not placed on the court roll pending  further investigation,” he said.

Nkwalase said investigators were awaiting an expert archeological report to establish the origin of the San Rock Art, to authenticate it and value the artwork ahead of the trial.

Ancient San Rock art is found in several locations across Southern Africa. The art depicts intricate records of what happened in the artists’ lives when they roamed the bushveld, caves and rocky hills thousands of years before and after Europeans arrived on the continent.

The drawings are found in caves and mountains, depicts the daily life of hunting, rituals, spiritual beliefs and wildlife providing a glimpse into the lifestyle of local tribes.