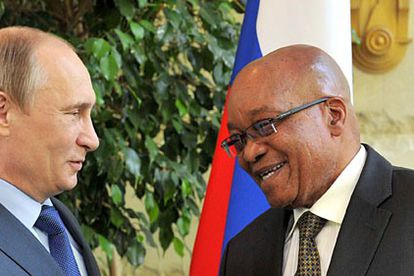 South Africa and Russia have signed a controversial intergovernmental agreement on “Strategic Partnership and Cooperation in Nuclear Energy and Industry”.

The inter-governmental agreement is one of over 60 different energy related co-operation agreements signed by the Department of Energy on behalf of government, which all say they address different aspects of energy and the usage of different energy sources.

“This agreement opens up the door for South Africa to access Russian technologies, funding, infrastructure, and provides a proper and solid platform for future extensive collaboration,” Minister of Energy Tina Joemat-Pettersson said upon signing the agreement.

With this cooperation established, SA is paving the way for more nuclear power plants to be built, using the latest and safest technology, while trends in other countries such as Germany are towards moving away from nuclear power. However, the ambitious project is intended to not only serve SA but to extend into providing energy to other African nations as well in a bid to solve Africa’s energy crisis.

Meanwhile, the Department of Energy also said in a statement that SA’s Russian partners would also benefit from the agreement:

“The Intergovernmental Agreement on Strategic Partnership in Nuclear Energy is focusing on Russian-technology multi-purpose nuclear research, assistance in the development of South-African nuclear infrastructure, education of South African nuclear specialists in Russian universities and other areas.”

The department added that it has noted the on-going public discourse around the agreement it signed on behalf of government with Russian state-owned company, ROSATOM, addressing worries that military technology might also benefit from the research behind the nuclear project. However, the Department did not comment any further on these suspicions other than saying that the nuclear deal was simply part of a greater government project to diversify South Africa’s energy supply.

“We wish to state that this agreement is not the first of such agreements that our department has signed. The South African government, in its normal course of work, signs different agreements with governments or their state entities to enhance cooperation in different areas of mutual interest,” the department explained

“It is within this context that our agreement with the Russian Federation on nuclear cooperation is based […]. This cooperation agreement and the others we have, and further intend to sign with other countries, is informed by our Cabinet approved Integrated Resource Plan (IRP) 2010, which emphasises an energy mix which comprises of coal, nuclear, renewable energy, gas, hydro and other energy sources.

“The process of engaging with the thrust of the agreement with the Russian Federation as represented by ROSATOM, and the South African government as represented by the Department of Energy, will be subjected to the normal process of internal government and legislative scrutiny, and obviously, the public, the media, civil society and political parties will have an opportunity, through such processes, to fully comprehend the full details of the agreement,” the department said.

Opposition politicians meanwhile voiced their concern about the secrecy behind the project. DA opposition leader Helen Zille said that “alarm bells should be ringing”.

“When the same contentious statement is issued verbatim and simultaneously by the Russian nuclear vendor in question […], [w]hen a government department issues a bombshell press statement about a nuclear deal the size of the entire South African budget, and no one in the department except the Minister seems to know about it, alarm bells should be ringing.

“There are many unanswered questions around this deal, but let’s start with the biggest one of all: How on earth does South Africa spend a trillion Rand without wrecking our economy and propelling millions of people further into poverty? […] There is no way our economy could survive this.”

But the Department of Energy refuted all allegations of “undue influence” by President Jacob Zuma towards concluding the agreement, describing them as baseless and “at worst ludicrous, and they are purely concocted in order to tarnish the image and integrity of the President and the government of South Africa”.