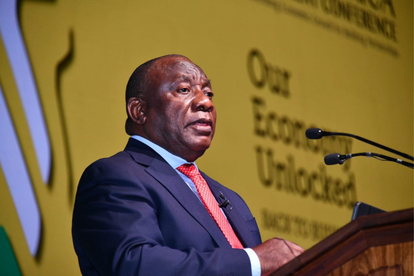 Ramaphosa congratulated the the Matric Class of 2021 following the publication of the long-awaited results. Image: GCIS/ Flickr

Ramaphosa congratulated the the Matric Class of 2021 following the publication of the long-awaited results. Image: GCIS/ Flickr

President Cyril Ramaphosa himself has shared in the joy and celebrations after the announcement of the Matric Class of 2021. The results, in line with traditions, were announced by Basic Education Minister Angie Motshekga on Thursday evening.

In a statement released by the Presidency to acknowledge the occasion, the class and all key roleplayers were commended for their success.

“President Cyril Ramaphosa commends the Matric Class of 2021 on the success achieved by this cohort of learners, educators and parents. The 2021 National Senior Certificate pass rate is 76,4%, with 256 000 learners eligible for university entrance.”

President Cyril Ramaphosa applauded those who managed to endure the difficulties imposed upon them during the COVID-19 pandemic. Certainly, with schooling interruptions plaguing students amid continued restrictions obtaining a pass was no easy feat.

“We applaud the multiple successes and improvements recorded by learners during the second year of challenges presented by COVID-19.”

Additionally, Ramaphosa commended both educators and parents who supported South African students during this difficult and challenging time.

“Equally commendable is the support given to learners by educators and parents who made sacrifices of their own and placed the interests of learners ahead of their own concerns.”

President shares message for those who failed

While the majority of students managed to make the cut, the President also had a few words of encouragement for those who failed to make their year.

“This is a moment for celebration for learners who have passed and a moment for other learners to return to their desks and make another effort to advance their education and improve their quality of life into the future. Our Second Chance programme is another route to success.”

The Presidency also passed along a warning for students who will be celebrating their success across the nation:

“President Ramaphosa calls on learners to celebrate responsibly and safely within the COVID-19 health protocols.”