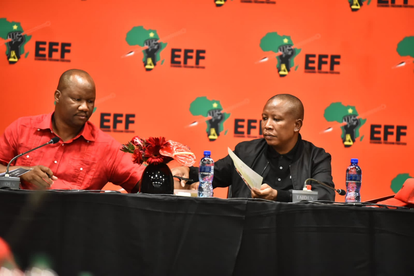 The EFF has accused the government of using COVID-19 as an excuse to obtain funds for other purposes. Image: EFF/ Twitter

The EFF has accused the government of using COVID-19 as an excuse to obtain funds for other purposes. Image: EFF/ Twitter

The Economic Freedom Fighters have rejected the R11 billion World Bank loan to the South African government after it was confirmed on Friday. The Red Berets issued a statement on the matter, highlighting their contempt at what the political party feels is a ‘senseless and irrational’ move.

“The EFF rejects the irrational and senseless R11 billion World Bank loan to South Africa with contempt. The World Bank Group Board of Directors approved South Africa’s request for an R11 billion loan purportedly necessary to support government efforts to accelerate COVID-19 responses. National Treasury reasons for the loan are unrelated, difficult to follow and purely misdirected in the absence of coherent and clear economic policy reform.”

EFF seizes opportunity to blast ANC with both hands

Furthermore, the EFF wasted no time in blaming the African National Congress for ‘catastrophic’ financial decisions over the past 25 years of democracy in South Africa.

“Despite indisputable evidence that South Africa’s economic policies choices in the last 25 years have been catastrophic for most black people while few whites and co-opted blacks enjoy unimaginable opulence, comfort and security. Nevertheless, some want us to believe that the National Treasury symbolises excellence in state institutions.”

The EFF statement continued by maintaining that the ruling party has failed to implement any meaningful economic reform in the country, despite being in control all this time.

The party continued by accusing the National Treasury of using the COVID-19 crisis as a cover to obtain funding for more sinister projects, slamming the World Bank loan as a fallacy.

“The National Treasury is using the plight of the poor and the COVID-19 crisis to entrench neoliberal policies. It is a fallacy that the R11 billion World Bank loan will help poor people in any way. The same was said about the R70 billion IMF loan, but parasitic charlatans of the ruling party looted it while hundreds died while waiting for vaccines.”

The EFF concluded the statement by revealing that it had requested an urgent meeting with the Finance Minister in a bid to obtain answers relating to the hefty loan.

“The EFF has also written to the Minister of Finance to demand a detailed explanation of the basis of the loan, conditions attached to the loan and repayment terms. These senseless and irrational loans are nothing but our sovereign and future bondage to the control and ownership of rating agencies, financiers, and the Washington Consensus.”

Daily devotion: Your bible verse and prayer for 04 October 2022