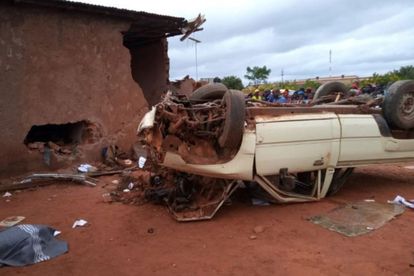 Basic Education Minister Angie Motshekga on Friday attended the funeral of six pupils who lost their lives in an accident after a classmate reportedly lost control of his father’s bakery vehicle.

Limpopo police spokesman Brigadier Motlafella Mozapello on Friday confirmed that the pupil was arrested after being discharged from hospital.

Brigadier Mozapello explained that the 19-year-old pupil took his father’s vehicle without permission. He lost control “and entered his house”. Mozapello added:

“Arrested him after leaving the hospital this week Went and has been produced in court”.

Minister Motshekga said on Friday that the pupil will appear before the Malamule Magistrates for a bail application on Wednesday, 28 April.

Speaking at a joint funeral for six of the pupils at the Saselamani Stadium in Limpopo, Motshekga said:

“I should also appeal to all the affected families and the community and also keep the student responsible for this unfortunate incident in my prayers. This loss is comparable to no one. I can’t even begin to imagine your pain as a parent, relative, and wider community”.

A learner from Jim Chavani Secondary gives a tribute to her fallen peers who passed on in a car crash last week Friday. @DBE_SA @edu_limp pic.twitter.com/zgMovWR8TW

Dr Reginah Mhaule said “there are not enough words to comfort the families of the six learners who lost their lives in a tragic car accident”. She also sent her sincere condolences to the families and school community.