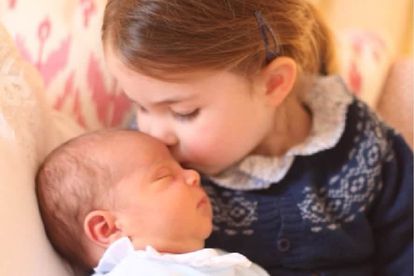 We’ve got a cuteness overload coming our way this morning. Two official tweets from the Kensington Palace account on Twitter have given the world its first glimpse of the royal family’s newest member, Prince Louis of Cambridge.

The heart-melting snaps were shared on Sunday, and have gone down a storm on social media. Louis, who was born on Monday 23 April, seems to be getting accustomed to the good life already…

The first image shared was of a three-day-old Louis, wearing his cute white babygrow and propped up against a pillow. At 72 hours old, the young chap already has a better hairline than his dad!

This image of Prince Louis was taken by The Duchess of Cambridge at Kensington Palace on 26th April.

The Duke and Duchess would like to thank members of the public for their kind messages following the birth of Prince Louis, and for Princess Charlotte’s third birthday. pic.twitter.com/bjxhZhvbXN

The second photo is all kinds of wonderful. His sister Charlotte, aged three, is more than happy to share her love for her young sibling. She’s pictured holding her baby brother and kissing him on the forehead. How sweet!

The Duke and Duchess of Cambridge are very pleased to share two photographs of Princess Charlotte and Prince Louis, taken by The Duchess at Kensington Palace.

This image was taken on 2nd May, on Princess Charlotte’s third Birthday. pic.twitter.com/H5VVgIwRGp

A game of thrones

It seems the pair are already best buddies, as well as royal children. There were no snaps of Prince George with his younger brother. The four-year-old will no doubt be appearing in one soon, though.

It’ll be interesting to see if Charlotte and Louis are still doting on each other in the distant future: Charlotte is the first female member of the royal family who won’t be replaced in line to the throne by a younger male sibling, due to a 2013 law change.

Something for George to playfully laud over Louis in the future, perhaps?