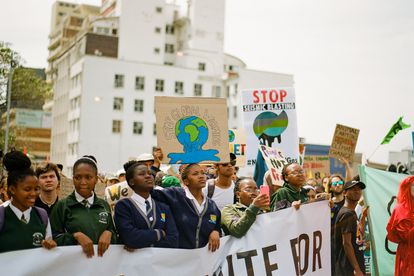 Hundreds of protestors marched to Parliament on Saturday, 24 September, and handed over a memorandum of demands to government. Photo: Storm Simpson / The South African.

Hundreds of protestors marched to Parliament on Saturday, 24 September, and handed over a memorandum of demands to government. Photo: Storm Simpson / The South African.

Saturday’s ‘March for System Change’ was the climax of Cape Town Climate Week. It was organised by the youth-led African Climate Alliance in partnership with various organisations, including Project 90 by 2030, Extinction Rebellion Cape Town (XR), Greenpeace and Rural Action for Climate Resilience and more.

The procession took the so-called short route to Parliament from Hanover Street and handed a list of demands to representatives from the City of Cape Town and Parliament.

One of the demands was for the urgent establishment of a permanent Parliamentary Joint Standing Committee on the Climate and Ecological Crisis.

The protestors want this committee to meet at least once per quarter in the hope that parliament will “fully internalise the grave threat” climate change poses to society.

The protest was quite literally youth-led with learners from a number of schools – in their full uniforms – at the head of the procession. One of the seven listed demands called for the Department of Education to adjust the national curriculum.

National literacy in climate change must be improved to adequately prepare the youth for the realities of the climate crisis, said protestors.

The African Climate Alliance said the energy department has been a stumbling block to a just transition in the energy and mining sectors.

“The DMRE must stop blocking and inhibiting Eskom’s transition to renewables and instead expand its mandate to rapidly build out renewable energy & energy storage,” read the memorandum of demands.

According to Extinction Rebellion spokesperson, Isabelle Joubert, the titular “system change” requires a complete overhaul of the political, social and economic systems that govern the world.