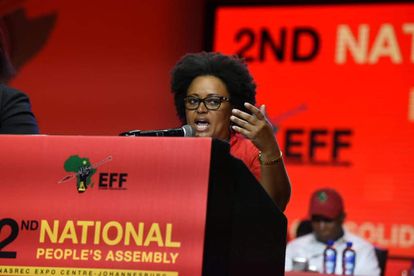 Mandisa Mashego is poised to leave her role as the EFF leader of Gauteng, following a furious verbal altercation with Julius Malema. Tensions have been rising between the pair, and everything seemingly reached boiling point at the beginning of last week.

Who is Mandisa Mashego?

Several media reports allude to the notion that Mashego left her leadership role on Sunday. It has not been verified that she has walked away from the EFF completely, however. Losing the popular figure in South Africa’s most densely-populated province would be a huge blow to party unity, and another PR nightmare for the Red Berets.

Several members have walked away from Malema’s rule over the past 18 months, citing differences with ideology and selection policies. Mashego would be the biggest casualty of the lot though, and it is believed her willingness to oppose some of Juju’s preferences has landed her in trouble.

One claim in Sunday World alleges that her opposition to the nomination of Marshall Dlamini as the party’s secretary-general put her in the bad books. The EFF’s recent Elective Conference drew a few clashing viewpoints to the surface, with Mashego and Malema occupying two very contrasting opinions.

Meanwhile, a source has told us that her opposition to Malema’s “open borders” policy helped set the uncomfortable atmosphere that now lies between the two. Yet the theme of “political disloyalty” also refused to go away: It has been suggested that Mandisa Mashego is even looking to join Herman Mashaba’s new political party.

However, this remains speculation for now. Her departure from the top regional job had been kept under wraps for the past few days, and we are expecting an official statement on the matter to be released by the EFF in due course. We’ll bring you that communication as soon as it’s published.