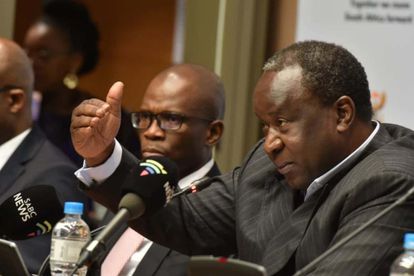 It’s kicking off big time between the finance minister and the EFF deputy leader. Tito Mboweni, part of the ANC Cabinet, has launched into a war of words with Floyd Shivambu and red-bereted colleagues over which one of them came with up with the idea to implement a “sovereign wealth fund. This, after “Tweet-o” moved to clear-up another confusing issue on social media:

Unfortunately, there is always room for misunderstanding “things”. @FloydShivambu misunderstood me when I talked about “disruption” as a political philosophical construct. I did not mean chaos and unruly behavior.

What is a sovereign wealth fund?

Both parties are championing this, and it is essentially a fund that the government use to invest in financial assets like stocks, real estate or even precious metals. It is seen as a sure-fire way to help bolster the state coffers, and there is currently a battle of intellectual property playing out in Parliament.

After the EFF punted the idea during the SONA Debate, Tito Mboweni decided that Twitter would be the best place to air his grievances. The minister accused Floyd Shivambu and co of copying his proposals, and alleged that it goes even further than simply establishing a sovereign wealth fund:

“Remember that these folks emerged from the ANC Youth League. They stole most of the ANC ideas, with n decorum, and pretended that these are their own. A sovereign wealth fund is an ANC idea, not theirs!”

“Eish, these people! Long ago, before THEY spoke about a State Bank, I did. And a State Bank will be established as a deposit taking institution. More details will be revealed in the budget speech.”

However, Shivambu fought back immediately. Julius Malema’s right-hand man challenged Mboweni to prove his claims, and gleefully hinted that the ANC stalward was “being led” by the EFF:

“Please show us one ANC document that proposed a sovereign wealth fund prior to the EFF Founding Manifesto in 2013. Please accept to be led minister Tito Mboweni and save yourself.”