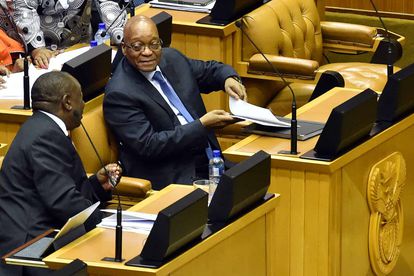 You can tell Parliament is back in session, can’t you? We’ve had our first outrageous accusation of this new post-coronavirus era in the National Assembly, and it’s a good one: EFF deputy leader Floyd Shivambu has alleged that Cyril Ramaphosa only replaced Jacob Zuma via a political coup.

Ramaphosa was elected as the successor to Zuma in 2017, but just two months later, Msholozi was forced to step down before his second term came to an end. Cyril replaced him, and the blood has been bad between the pair ever since. However, one of Parliament’s chief agitators had a pot to stir on Thursday… seemingly changing his party’s original claims that they were ultimately responsible for pushing JZ out of office.

Shivambu interjected during the president’s response to an earlier question, accusing Cyril Ramaphosa of “engineering a coup d’etat” against Zuma back in February 2018. His comments had initially flown under the radar, but the impeccable hearing capacities of Jackson Mthembu picked something up that was missed by the house. The minister, on a point of order, said:

“Honourable Shivambu just said the president led a coup d’etat against Jacob Zuma. That’s incorrect. There was no coup when Zuma was replaced. In terms of our rules, he should really withdraw that statement.”

Shivambu then refused to withdraw the statement and, strangely enough, House Speaker Lesecha Tsenoli was happy to brush over the matter. Ramaphosa then continued to defend his lockdown policy, uninterrupted.

Floyd Shivambu later rose on another point of order, rejecting Ramaphosa’s position on land expropriation. A row then erupted between the EFF deputy leader and another ANC MP, who took exception to Shivambu’s claim that the president wanted white farmers to “donate land to black South Africans”, effectively moving away from the model of land expropriation. Ramaphosa denied this was his intention.

Mthembu says there was no coup detat against Former President Zuma. Tsenoli says we will look into it and Shivambu says he wasn't going to withdraw his remarks. #RamaphosaQandA