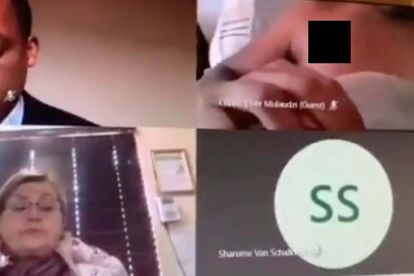 It’s been a while since the term “nip-slip” made headlines, but now it’s making a comeback after a member of the Department of Public Works and Infrastructure shocked his colleagues and the nation on 17 June when he appeared on a virtual portfolio meeting over Zoom topless and lying in bed.

Christopher Mulaudzi has been identified as the owner of the now infamous nipple, and he’s landed himself in hot water after his department announced that they would be taking disciplinary action against the topless crusader.

Department to proceed with disciplinary action against topless official

“The official was caught on video laying on the bed, topless and wearing only shorts while the meeting was in session, a behaviour which the department strongly condemns as it undermined the decorum of the meeting,” he said in a statement released by the department.

“This kind of behaviour is totally unacceptable and has brought the department into serious disrepute,” he said.

Vukela said that the matter would be referred to a disciplinary committee who would determine an appropriate course of action to be taken against Mulaudzi.

“I have referred the matter to the CEO of the Independent Development Trust to look further into it, to determine the appropriate corrective measures to be taken.”

“The CEO will in due course provide the minister with a report on the outcome of this matter and also the measures which have been taken in this regard.”

During the COVID-19 pandemic, zoom calls have become the most normative way of connecting with colleagues, friends and family. This has led to an unprecedented number of gaffs that have been equal measures hilarious and cringeworthy.

On Thursday 18 June, the “floating head” of a member of the National Assembly, Lusizo Makhubela-Mashele appeared on the screen, obviously as a result of her wearing a green outfit that clashed with the green-screen tech.

Earlier during the lockdown, a number of parliamentary Zoom meetings were also infiltrated by hackers who posted pornography on the feed.

Remember to keep it safe for work even when you’re working from home, folks.