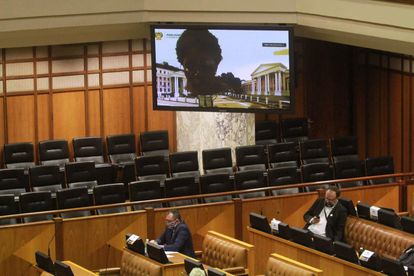 President Cyril Ramaphosa responded to supplementary questions during the Plenary National Assembly held on Thursday, 18 June 2020. However, the sitting wasn’t without a few hilarious moments.

The trouble started a few minutes into the meeting; a background-related technical glitch caused a member of the National Assembly, Lusizo Makhubela-Mashele, to appear as a floating head.

Makhubela-Mashela mentioned that the aftermath of any economic downturn or devastation is usually characterised by extensive market regulations and industrial planning, which are state-led. She asked:

“What policy options being considered by government that would allow and give space to the hard-hit sectors to recover; specifically the protection of locally manufactured products?”

He added that South Africa’s economy has to be reset, along with the structure of the economy and that policymakers need to “look at the way we’ve always done things. COVID-19 “should herald a new change,” the president added.

“In a way, much as COVID-19 is a dark cloud hanging over the lives and the economy of our country, it does have a silver lining. The silver lining is that it gives us an opportunity to look at the way we’ve been doing things. Our policies and our processes, our institution; and see whether they are still fit for purpose to deal with the devastation that COVID-19 is going to bring about.”

However, on a lighter note, Director of Digital Marketing for the Democratic Party and Media Officer to the DA Leader, Azola Mboniswa, said on social media:

“We equally need to address these Zoom or virtual meeting background banners and how they mess up visuals. What is this in Parliament during Ramaphosa’s Q&A? Are these banners necessary?”

Valid question, seeing as there was quite some discussion about banners and backgrounds during the National Assembly Q&A. The speaker told members of parliament that they wouldn’t be allowed to speak if they have not set a background in Zoom.

Members asked why President Ramaphosa wasn’t using a background; to which the deputy speaker replied that the president is not a member of parliament. Therefore there is no need for him to use a background.