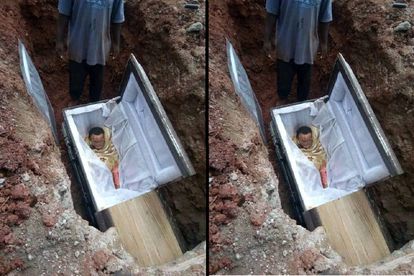 This was the alleged shocking scene that greeted locals in Ha-Gelebe – Photo: Yusuf Abramjee

This was the alleged shocking scene that greeted locals in Ha-Gelebe – Photo: Yusuf Abramjee

A crazy story has reached us from Limpopo over the long weekend, after reports from local sources claimed that a young man who was buried just WEEKS ago has now been found alive and well in Gauteng.

Did this Limpopo man rise from the dead?

The suspected ‘coffin dodger‘ has raised a myriad of questions within the local community, and in turn, sparked something of a frenzy online. The story has certainly captured imaginations in Mzansi.

Observers have also been unnerved by the discovery of what was inside the coffin when it was dug-up, and let’s just put it this way… there was certainly no *human* remains inside the box…

A family from Ha-Gelebe, Thohoyandou, buried their 18 year-old son in March, only for the boy to be spotted in Gauteng. When grave was dug they found a, wait for it…..a DOLL.
I have so many questions

A boy who they claim died in March 2022 in Ha-Gelebe outside Thohoyandou and was buried…but it was later discovered that he was seen in Gauteng. His grave was dug open only to find a doll in the coffin. Via #BagoloNews pic.twitter.com/kc9oWFBhY5

" 18 years old boy who they claim died in March 2022 in Ha-Gelebe outside Thohoyandou, Venda, Limpopo and was buried, but it was later discovered that he was seen in Gauteng Province. His grave was dug open only to find a doll in the coffin." Source : Vembe FM pic.twitter.com/IV7BDZplnu

Is it illegal to fake your own death?

One theory that seems to have gained traction over the past couple of days is that the teenager has managed to fake his own death. However, this can result in some serious legal consequences.

If our very own ‘Lazarus’ has staged his demise in order to make an insurance claim or indulge in identity theft, then that will leave him at the mercy of the South African judicial system. However, if there was no financial or criminal element involved, then the teenager won’t have broken the law.

We’ll definitely bring you more developments on this story, as and when we receive them…