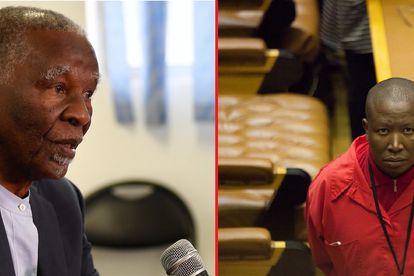 Former President Thabo Mbeki has unwittingly found himself back in the news this week, after Julius Malema accused him of plotting to ‘remove’ Cyril Ramaphosa as the current head of state. However, Mr. Mbeki responded by branding Juju’s claims as ‘scuttlebutt’.

Why is Cyril Ramaphosa under so much pressure?

Yeah, we’ve never come across the term either – but there’s some context to get through first. During another shoot-from-the-hip press conference, Malema lambasted the current president. The EFF leader wants Ramaphosa out of office, due to the ongoing Phala Phala saga.

In 2020, Ramaphosa’s farm property in Limpopo was targeted by burglars. However, these crooks got more than they bargained for upon entering the dwelling. They discovered $4 million in US Dollars, hidden in strategic locations. The discovery was, eventually, reported by Arthur Fraser.

The former Correctional Services Chief filed a criminal case against the president earlier this year – and Cyril has been battling against allegations of corruption ever since. However, Fraser’s own motives have come into question… and things got a little conspiratorial yesterday.

“Whose agenda is Arthur Fraser driving? The answer is he’s working with Thabo Mbeki in the unseating of President Ramaphosa, because Mbeki says he is still disgruntled for not finishing his term. Fraser is actually working with Mbeki, and not the RET forces.”

This suggestion, however, has been met with unapologetic contempt from the Mbeki camp, who feel that the Red Berets are merely trying to deepen divisions within the ANC. His foundation issued a statement earlier today, slamming Malema by using the term scuttlebutt…

“President Mbeki rejects Julius Malema’s scuttlebutt with the contempt it deserves. He is certain that it originates from the old Apartheid intelligence machinery. It is intended to deepen divisions within the ANC and to frustrate efforts towards the organisation’s renewal.”

What does scuttlebutt mean?

It’s certainly a word with a fascinating lineage: Scuttlebutt is a colloquial term for ‘rumours, gossip, or news that may not necessarily be true’. It was once used to describe the cask that served water to nautical travellers on board ships.

The reason scuttlebutt evolved into its current meaning, is because the aforementioned cask is likened to the ‘water cooler’ setting in an office – where workers would traditionally gather to share gossip and have a skinner about their colleagues. So there we have it!

scuttlebutt: In slang usage means rumor or gossip, deriving from the nautical term for the cask used to serve water. The term corresponds to the colloquial concept of a water cooler in an office setting, which at times becomes the focus of congregation and casual discussion.