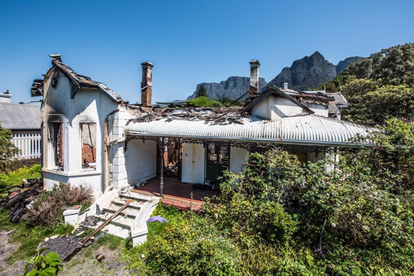 The house in Rondebosch has long been a figure of ridicule online – but a buyer has now swooped for the property – Photo: Pam Golding / Property24

The house in Rondebosch has long been a figure of ridicule online – but a buyer has now swooped for the property – Photo: Pam Golding / Property24

Who says the Cape Town property market is extortionate? For just R3.4 million, you too can buy yourself a dwelling fit for a crime scene. Against all odds, this run-down house in Rondebosch has sold for MILLIONS of Rand this week.

Cape Town property market: Why has this house sold for so much?

The house has been on the market since the second half of 2021. It went viral when it was first listed, as social media users were quick to point out its myriad of flaws. Rooms gutted by fire, walls collapsed on the floor, and debris littered across corridors raised titters online.

The fact it has been identified as a ‘three-bedroom house’ also drew some stinging rebukes. Good luck finding them in here!

Would you spend millions on this property?

However, after doing a bit of digging this week, it came to our attention that this old ruin had FINALLY been sold-on. The listing, shared by Pam Golding on Property24, managed to fetch a whopping R3.4 million. And it seems the brave buyer ended up with a cut-price deal…

Welcome to 29 Lovers Lane! You’ve seen the cons, so let’s have a look at some of the pros…

Now, you have to simply admire the optimism shared by the estate agents here: They only focused on the positive aspects of the house, despite its ruinous condition. Choosing to highlight the property’s picturesque views and desirable location, the following details were championed:

And if that doesn’t tickle your fancy, perhaps a quick history lesson will: The property was once owned by the Cecil John Rhodes Estate, and it has officially been listed as a Heritage Site. All of a sudden, that R3.4 million is looking like money well spent…

Well, maybe not… but the million-rand purchase does at least come with some context:

“Steeped in history, this home was once part of the old Rustenburg farm – a portion of which was consolidated into Cecil John Rhodes’ Groote Schuur Estate. Rhodes established the Japonica Walk immediately to the north of this site. The property suffered severe fire damage in 2018.”

“The seller has a number of approvals in place, such as Council and Heritage approved plans for a single-storey dwelling as well as double storey plans approved by Heritage only. Some remnants of the structure are still intact, including the beautiful front verandah.”

For many, the sheer scale of the rebuild means that a R3.4 million price tag is completely out of the question. But one ambitious punter has now decided to take the plunge – and if they can somehow raise this phoenix from the ashes, it’ll prove to be a VERY shrewd investment.

It also means there’ll be a new neighbour in town for Monique Weits. The Rondebosch resident, who lives around 50 metres away from 29 Lovers Lane, was caught by surprise when the ‘sold boards’ went up last week – but she thinks the price is ultimately a fair one:

“I first noticed a sold sign there last week. The property burnt down years ago, before we moved the kids into the neighbourhood, and I believe it was a student digs when I was still studying here. It had been passed down from the pre-war ownership… I’d say it is worth the R3.4 million.”