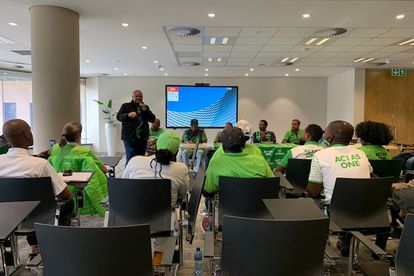 ActionSA, the newly-formed political party that made a huge impression during the 2021 Local Elections, has revealed an outlandish new policy. Leader Herman Mashaba confirmed on Monday that the organisation has banned the use of the word ‘comrades’ across the board.

Although not exactly a dealbreaker for the party, ActionSA members will be discouraged from addressing their fellow party representatives by the C-word. It’s a term frequently used by rivals in the ANC and EFF – which is pretty much the point Mashaba is making.

According to the veteran politician, ‘comrades’ has developed a new meaning in South Africa. He believes it largely refers to the ‘thugs and thieves’ who have been running the country for the best part of the last three decades.

Why would the word comrades be worthy of a party-wide ban?

Mashaba, a rampant capitalist, also dislikes the connection this word has with communism. He has instead suggested a different term for his followers to use, asking party members to refer to each other as ‘Actioners’. Only time will tell if this can catch-on.

“The term ‘comrades’ is banned in ActionSA.

‘Comrades’ are thugs and thieves. We are not communists.

In ActionSA, we are ‘Actioners’.” – @HermanMashaba

On Monday, Herman Mashaba and his fellow Actioners welcomed a wise old head to their pack, after announcing Sello Lediga as their first ever Provincial Chairperson for Limpopo. Lediga spent twenty years working for the ANC in its provincial government, before splitting from the party.

“Sello Lediga is a candidate that promises to take the incredible work that has been done to establish ActionSA in Limpopo and drive it to new heights – and his background in the ANC is something that we celebrate in ActionSA.”

“As a party we have demonstrated an unparalleled ability to win support away from the ruling party, and this is the only way that they can be removed from office. Leadership like Sello Lediga joining ActionSA is critical to this project of bringing down the ANC.”