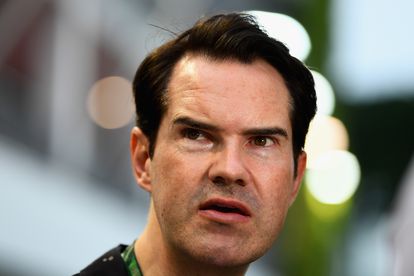 SINGAPORE – SEPTEMBER 16: British comedian Jimmy Carr looks on in the Paddock before the Formula One Grand Prix of Singapore at Marina Bay Street Circuit on September 16, 2018 in Singapore. (Photo by Clive Mason/Getty Images)

SINGAPORE – SEPTEMBER 16: British comedian Jimmy Carr looks on in the Paddock before the Formula One Grand Prix of Singapore at Marina Bay Street Circuit on September 16, 2018 in Singapore. (Photo by Clive Mason/Getty Images)

There’s nothing Jimmy Carr won’t joke about. Honestly, the man is cancellation-proof. Crude, rude, and outrageously lewd, the Brit is no stranger to stirring up controversy – and this time, he’s upset the anti-vaxxers.

The pun-slinger’s new stand-up comedy special comes to Netflix later this month, and it promises to be yet another no-holds-barred performance. Carr has previously toured in South Africa, and has a number of fans here.

However, Jimmy is likely to lose a number of supporters in one particular community. Anti-vaxxers have now labelled him a ‘fascist’, a ‘paid stooge for big pharma’, and an ‘utter disgrace’ – all because of this one joke…

His playful jape has been well received by many, and certainly kept the audience giggling. But those who are still refusing the vaccine are in no mood to forgive and forget, with some saying they’ll never watch his shows ever again.

Jimmy Carr is now a top global trend on Twitter, and although he’ll welcome the publicity boost for his new show, the 49-year-old has essentially been blacklisted by a sub-section of society that claims to hold the values of free speech sacred.

Carr, who has taken aim at just about everyone and everything in his twenty-year career, is now facing another backlash – but it’s nothing he hasn’t seen before. And by his own debauched standards, telling someone to ‘slap themselves in the face’ really is child’s play – something his fans have been keen to highlight: