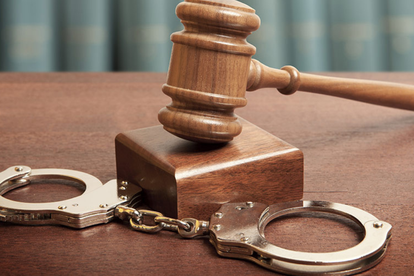 A former police officer was sentenced to 25 years for murder and 20 more years for pointing a firearm.
Photo: Twitter / @SAPoliceService

A former police officer was sentenced to 25 years for murder and 20 more years for pointing a firearm.
Photo: Twitter / @SAPoliceService

A 30-year-old man in the North West who was convicted for rape received two life sentences and additional 28 years imprisonment for his crimes.

The South African Police Service (SAPS) in the province says the man was sentenced by the Bafokeng Regional Court in Tlhabane on Wednesday, 15 June 2022.

The sentences emanated from three separate incidents wherein victims were raped and robbed of their cell phones and clothes, spokesperson Lieutenant Colonel Amanda Funani said in a statement.

“In the first incident, a 15-year-old girl was with her boyfriend and walking to a nearby shop at Pitso Section in Phokeng outside Rustenburg at about 20:00 on Tuesday, 5 January 2021, when approached by the convict. The latter chased and forced the boyfriend to leave by throwing stones at him. The girl was consequently taken to the nearby bushes and raped. On her way back home after escaping, the girl met her boyfriend and her aunt who took her to Phokeng police station to lay charges of rape and common robbery,” said Funani.

In the second incident, which occurred just days later, the man approached a 22-year-old woman who was from her aunt’s place at Kotokoto Section, Phokeng and going back to her residential place at Lenatong Section. He volunteered to accompany her as he was also going to the same area. Police say they were about to cross the bridge when he grabbed and dragged the woman to the nearby bushes and raped her.  He then robbed her of her cell phone and clothes before fleeing from the scene. The matter was reported to the police for investigation.

“In the third incident which occurred 30 minutes after the second one at Lemenong Section, the convict met and approached a 14-year-old minor who was on her way home.  He wanted to know if she was not afraid of walking alone and ultimately dragged her to the bushes and raped her. Thereafter, he robbed her of her cell phone and clothes. Subsequent to the incident, the victim ran to Phokeng police station where she reported the incident and also found the 22-year-old woman reporting a rape case and common robbery.”