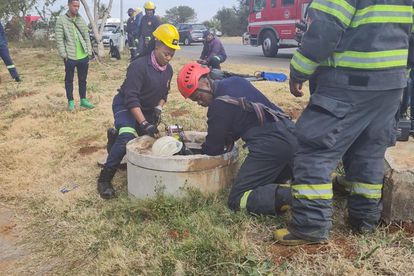 The youngster had been playing with his friends when he slipped and fell into a manhole last week.

Since then, the City of Johannesburg Emergency Services (EMS) personnel have spent everyday on the ground trying every rescue technique at their disposal.


To intensify the search, EMS introduced high-tech gadgets in the means of a boat and robot to be the eyes of the personnel in unreachable places of the manhole.

“It’s Day 7 of the search operation of young Khayalethu who slipped and fell in the manhole while playing with his friends last Sunday,” Joburg EMS spokesperson Robert Mulaudzi said in the caption of the video highlighting the efforts that are being put in by officials to retrieve Khayalethu Magadla from the sewer system.

Speaking to eNCA, Mulaudzi said, “On Tuesday, we already cleared the first block/ section from where the young boy fell in the manhole on Sunday”.

THE AID PROVIDED BY THE ROBOT INSIDE THE MANHOLE

“With this robot, we cleared from the second to the third section of the manhole,” said Mulaudzi.

“We got the footage of the manhole but we couldn’t find anything along the line. But we were happy that it’s cleared. So what’s gonna happen is that we continue with the fourth manhole which will take us to the fifth manhole”

“These footage will be able to assist us to see if we can be able to locate Khayalethu Magadla and if we do we will be immediately sending technicians along the line to be able to recover the young boy,” Mulaudzi explained.

He also explained that they needed to cover eight manholes which flow in the direction of the split chamber.

“At the end of the day we are moving slowly towards the split chamber, hoping that all the uncertainties along the chamber will be cleared,” he explained.