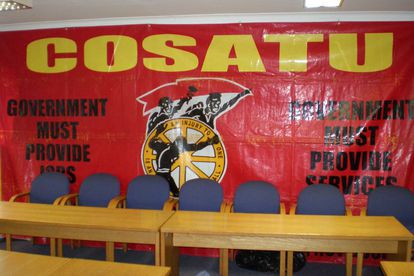 COSATU will soon host a media briefing to detail the plans for the national shutdown on 24 August. Photo: tnewmilrf / Flickr

COSATU will soon host a media briefing to detail the plans for the national shutdown on 24 August. Photo: tnewmilrf / Flickr

The Congress of South African Trade Unions (COSATU) will be hosting a media briefing on the morning of Sunday, 21 August.

Union wants Government to tackle the issues locals are facing

The Union aims to detail its plans for the upcoming national shutdown strike. COSATU recently made calls for all South Africans to down their tools on Wednesday, 24 August, to push back against the Government and private sector’s lack of tackling socioeconomic challenges.

COSATU believes the only way to get the Government to tackle the issues, such as the unaffordable cost of living, is to bring the economy to a halt. Some of the issues COSATU hopes to raise with the national shutdown are the ongoing load shedding, escalating food prices and fuel price hikes.

The union also called for a mass stay away, reports EWN. A number of rallies are expected to take place across South Africa on 24 August. Saftu will also be embarking on a national shutdown on the same day.

Previously, it was reported that a National Shutdown planned for Wednesday 24 August has just been given a major boost. Cosatu, one of the largest trade union organisations in South Africa, have agreed to go on strike alongside the original planners of SAFTU. It has huge implications for the demonstrations.

Cosatu notified NEDLAC of its intention to join the industrial action earlier this month. Around one million members of each trade union will take to the streets just nine days from now, with demonstrations promised in every province of South Africa.

The protests will be largely aimed at high fuel prices, the rising costs of living, and rampant criminality in every corner of the country. Cosatu and SAFTU are on the same page for this one, with the former planning to host a press conference to confirm the details of their own strike action. Read the full story here.