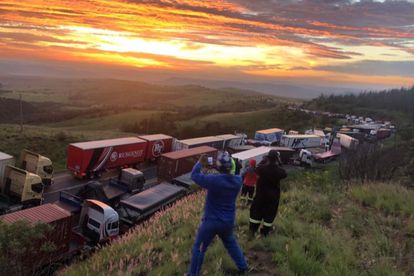 The traffic on the N3 was starting to move on Friday evening after several truck drivers were taken in for questioning.

N3 WAS BLOCKED FOR THE ENTIRE FRIDAY

According to police spokesperson Brigadier Jay Naicker, police have taken a number of truck drivers in for questioning after their trucks were found parked across both lanes of the N3 near Van Reenen.

“In the early hours of this (Friday) morning, police were notified of the blockade and responded to the scene. Police officers found that the trucks were abandoned by the drivers who removed the keys before they left,” he said.

Naicker said police were able to locate the drivers and the keys for their vehicles.

“The trucks were removed and traffic is able to move albeit very slowly. We urge motorists to avoid the area until traffic is flowing smoothly. Additional police officers have been deployed to the area to ensure no further blockades on the route,” he said.

The N3 toll route between Gauteng and KwaZulu-Natal was blocked for the entire Friday due to a massive truck blockade.
Drivers were diverted to alternative routes.

Meanwhile, the Road Freight Association (RFA) has urged the government earlier to arrest the truck drivers and instigators who were blockading the N3.

RFA CEO Gavin Kelly said that the logistics industry was “being held captive by those who prefer to work outside the law”.

“The vital N3 route between the Port of Durban and the interior has been blocked, again. Violence and looting have occurred according to some reports – whilst individuals have taken the law into their own hands to pull drivers from trucks to check their personal documents,” Kelly said.

The motive for the protest has not been disclosed at this stage.