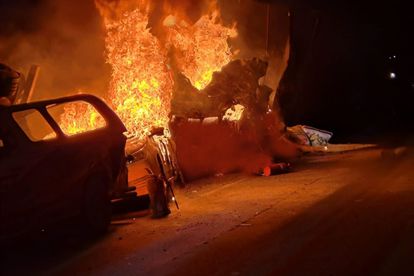 At least 16 people have been confirmed dead in the multiple vehicle collision on the N3 in KZN. Photo: Facebook/Netcare 911

At least 16 people have been confirmed dead in the multiple vehicle collision on the N3 in KZN. Photo: Facebook/Netcare 911

At least 16 people have been confirmed dead in the horrific multiple vehicle collision on the N3 Southbound in Pietermaritzburg on Saturday morning.

Some taxi occupants were burnt to death in the collision on the N3 Southbound between Peter Brown and Chatterton Road off-ramps in Pietermaritzburg. Emergency personnel were able to rescue a 7-year-old boy.

As previously reported, two trucks, a bakkie, two minibus taxis and five other cars were involved in a collision resulting in a fully laden taxi bursting into flames. The fire had spread to other vehicles and had engulfed the taxi with all its occupants.

It was also reported that multiple other motorists had been injured and are being treated by medical personnel from multiple ambulance services, and an official number had not yet been determined.

The 7-year-old survived after his mother who was also trapped in the minibus was able to squeeze him through the window and handed him over to an Road Traffic Inspectorate (RTI) officer who had been attending to the truck that had overturned.

The boy was rushed to Northdale hospital where he is currently being treated for internal injuries.

KwaZulu-Natal MEC for Transport, Community Safety and Liaison Peggy Nkonyeni said preliminary reports indicate that a truck had initially overturned on the N3.

As it was still waiting to be removed from the freeway and as vehicles were travelling trying to divert from the overturned truck, a Toyota Quantum minibus went under the truck causing a chain reaction which resulted in a nine car pile up.

Nkonyeni said it is believed that the Toyota Quantum minibus was traveling from Gauteng to Harding in KZN.

According to Mi7 emergency services, the accident scene comprised of three separate accidents about 100m apart.

The first accident involved a collision between a tipper truck and a car. Two patients from this scene were reportedly treated and transported to hospital with minor injuries by Mi7 medics and their counterparts from other service providers. Three other occupants were also assessed and found with no injuries.

The second accident involved the minibus taxi whose occupants were burnt to death.

At the third accident, a taxi had crashed with another motor vehicle. Eight patients were left with injuries and were treated and transported to various hospitals by a number of service providers.

URC duel of the week: Vermeulen vs Roos in audition for Springbok No 8 jersey