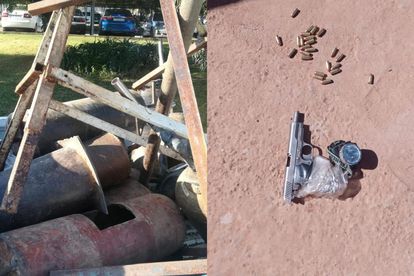 According to the police, specialised operational units deployed in the West Rand have ensured the arrest of 110 suspects and seizure of illegal mining equipment, firearms and gold-bearing minerals.

The deployment forms part of the ongoing police efforts to combat illicit mining and associated crimes in the West Rand.

“Following the two-day Izimbizo held in Krugersdorp and Kagiso in the West Rand last weekend, the ongoing District and Provincial operations have been boosted by additional forces from the National Head Office to combat illicit mining in the area.”

The units that have been deployed include Tactical Response Teams (TRT), National Intervention Unit (NIU) and Special Task Force (STF), Public Order Police (POP), Mounted Unit, Visible Policing, K9 Unit, Economic Infrastructure Task Team and Directorate for Priority Crime Investigation specifically to focus on medium to high-risk situations in the district while POP and Crime Prevention units focus is to enhance visibility and prevention of crime in the communities.

Mawela said the Department of Home Affairs officials on the other hand are assisting with arrested undocumented persons.

This massive operation follows the rape of eight girls who were intimidated and raped by illegal miners while shooting a music video at an abandoned mine dump in Krugersdorp, west of Johannesburg.

The shocking incident caused an uproar and exposed the worrying conditions that residents of the area have been living under due to the illegal mining shenanigans in the area.