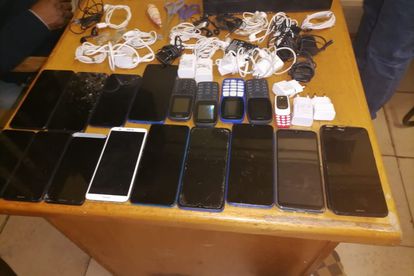 A joint operation led to a cybercrime search and seizure as well as executing warrants of arrest for four convicted inmates.

The South African Police Services (SAPS) revealed that the Hawks Serious Corruption Investigation team assisted by the Emergency Support Team (EST) from the Gauteng Department of Correctional Services (DCS) conducted the joint operation at Odi and Baviaaspoort Correctional Centres in Mabopane and Pretoria.

The four convicted inmates were caught on an assortment of charges including extortion, impersonation of a police officer, money laundering, forgery and uttering. Spokesperson Lieutenant Colonel Philani Nkwalase said this follows an in-depth probe into corrupt police officers.

How did the suspects conduct their extortion scam?

It was alleged that these officers were extorting money from a number of male victims who sought the services of a clandestine online escort agency.

“The victims would later be informed by someone purporting to be a police officer that a case of rape and fraud was open against them as they used fake money to pay the sex-workers. They would also present a fake warrant of arrest through WhatsApp and demand payment to ensure that the police along with the prosecutor make the cases disappear,”

The investigation by the Hawks revealed that a syndicate of inmates, who had cellphones, allegedly created profiles of the officers. They used combinations of their names and photos that were taken from the social media accounts of the unsuspecting officers.

A call log was also sourced from an online based escort agency. This was used to contact the victims who paid the agency. Between May and August of this year, amounts of R760 000 and R560 000 were paid into two separate accounts by the victims.

The Hawks confiscated multiple smartphones from the four suspects. A total of 36 cell phones, 19 charges and other accessories were found in the hands of other inmates in the same cells.

The four inmates are aged between 26 and 32 years old. They are expected to appear before the Pretoria Magistrate’s Court on Monday, 15 August.

Major General Ebrahim Kadwa, the Hawks Gauteng head commended the team for their efforts in ensuring the successful arrest and seizure of the items used to commit the crimes. Kadwa warned those using services of sex workers and attempting to pay police officers to avoid arrests that they will face charges of corruption if they do not cooperate with the ongoing investigation.