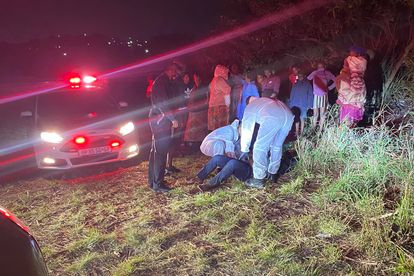 A man was shot in the head and killed while two others were injured when an unknown man walked up to the passenger side of the silver Toyota Tazz and opened fire on Friday afternoon.

He said RUSA received a call for immediate assistance at approximately 17:44 after a man collapsed on the ground during a soccer match.

“On arrival, Reaction Officers found the man bleeding from gunshot wounds to his chest, back, and arm. The 31-year-old informed Officers that his vehicle was parked on an unnamed road opposite the soccer grounds, and he believed that his passenger was deceased.”

While attending to the injured man, his brother arrived and informed officers that he was also in the vehicle at the time of the shooting but luckily not injured.

“The brother explained that they were parked on the roadside waiting for a friend when an unknown male walked up to the passenger side of the silver Toyota Tazz and opened fire.”

The brothers abandoned the vehicle and fled through a pathway.

The injured man was treated on the scene before he was taken in a serious but stable condition to a hospital.

“The brother who was not injured led Reaction Officers to the Toyota Tazz where a man was found deceased in the passenger seat.

“He had been shot in the head. The deceased is confirmed to be a taxi driver.”

Balram said, according to information, the injured man is a manager at the Mahlabatini Taxi Rank.

“The Verulam SAPS were in attendance and had secured the scene. The motive for the shooting has not been confirmed at this stage.”