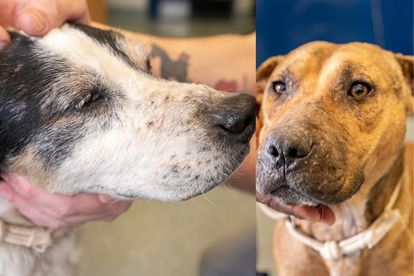 The Animal Welfare Society of South Africa (AWS) said the two dogs taken from a prime suspect in the Manenberg serial cat serial case would be given a second chance after behavioural observations. The pair have formed a bond after their time together and are inseparable, according to AWS.

The AWS spokesperson, Allan Perrins, said the dogs were suspected of being used to ‘hunt’ cats in the Manenberg area before they were brutally killed by whoever is behind the heinous killing spree. After reviewing CCTV footage of two cat attacks, the organisation seized the dogs on 16 August.

“Both dogs have extensive scarring especially to their faces indicative of cat claw lacerations. This will be independently verified by our Senior Veterinarian whose findings will form a crucial part of the case,” said Allan Perrins, at the time.

The AWS said it was immediately apparent that the dogs – who have since been named Bobby and Faith – were acting on the instructions of a person or group of individuals after reviewing the footage, on Friday, 27 August.

“[The dogs] set out to do a job as instructed and they did the job to the best of their abilities, they never picked their owners or the jobs they were given.”

“All along these poor dogs had no idea that their behaviour towards cats was inappropriate and dangerous because their learning was based on strong associations spurred on and instructed by cruel human beings.”

Perrins said that Bobby and Faith have an inseparable bond and now that the “broken old souls” have been examined and formally given the benefit of the doubt and “an excellent prognosis for total transformation by an esteemed jury of experts” the healing process would begin.

The animal welfare organisation looks forward to giving the pair of dogs a brand new “leash” on life.

The 43rd cat killed – a tiny ginger kitten – was found in Manenberg on 25 August after 10 days of calm in the area. The suspect Bobby and Faith were taken from was taken in for questioning by the police on 20 August but was released due to a lack of evidence. The suspect denied ownership of the dogs and involvement in the cat-killing spree.