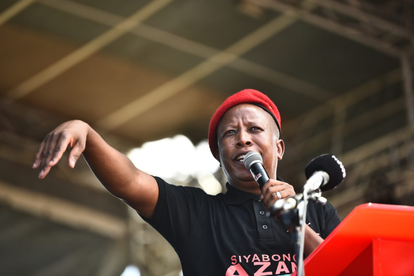 EFF leader Julius Malema has taken more than a few shots at the ANC during its own rally on Saturday. While the ruling party held its annual birthday celebrations the Red Berets hosted their own and the ANC took more than a few blows during the occassion.

The Economic Freedom Fighters have aggressively pushed for land expropriation in South Africa, a move Malema claims the ruling party has attempted to claim is its own.

“The ANC Hijacked our bill in parliament and started speaking about land bill that calls for “nill compensation”. We want the expropriation of land without compensation. We don’t want English.”

The EFF boss insists that the party wants ‘our land’ and furthermore wants it for free, telling supporters that:

“We will never vote for racist settlers who stole our land to be compensated. We want our land MANJE and for free.”

EFF leader claims Ramaphosa’s time in power is over

Interestingly, Malema also insisted that President Cyril Ramaphosa’s time as the leader of the nation is swiftly coming to an end. The EFF head insists that the party is building itself up to compete with the ANC.

“We are going to take KZN come 2024. The ANC is below 50 percent in all Provinces. Ramaphosa will never see a second term as the President of South Africa.”

Malema, speaking in the province, claimed that the ANC has a hatred of black people in KwaZulu-Natal.

“The ANC people here in KZN hate black people. That’s why when black people were murdered in Phoenix, they only visited Indian areas.”

In conclusion, Malema hinted at the ruling party obtaining power through means other than voter support. The EFF leader says that, despite this, the ANC still fails to perform its most basic duties.

“The ANC is in power through other means but it still is not servicing our people. There’s a sewere spillage in Mangaung but the ANC is not doing anything about it, even though our people shot a warning shot.”