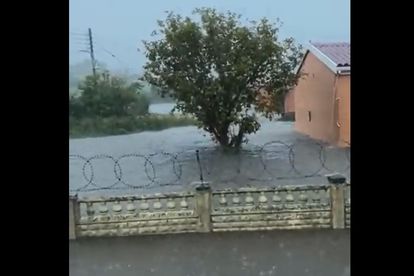 A house is flooded in Mdantsane in the Eastern cape. Photo: Twitter @AneleFumba

A house is flooded in Mdantsane in the Eastern cape. Photo: Twitter @AneleFumba

While the Western Cape battles fires and scorching hot temperatures, Eastern Cape floods are causing all kinds of damage in the neighbouring Cape province. Seven people have been killed since heavy downpours caused chaos over the weekend. Unsurprisingly, the video footage of some of the rising water levels is nothing short of terrifying. Eastern Cape Premier Oscar Mabuyane is on the ground with his team and mopping up operations are underway.

Videos of heavy flooding in the Mdantsane area in the Buffalo City Municipality left South Africans stunned on Saturday night. Several bridges and roads were seen being completely engulfed by rapid water. Several houses and informal structures were also almost completely washed away.

Hundreds were forced to flee to higher ground, with their belongings being severely damaged from the water. The youngest drowning victim was just 19. A Police rescue diver has also reportedly lost his life.

Help on the ground

Buffalo City has activated disaster management teams. They are also getting support from NGO’s like Gift of The Givers and others.

Mabuyane is in Mdantsane today with his team, and revealed that some of the homes affected were due to be removed from the area. The provincial government is now looking at ways it can accommodate those displaced by the Eastern Cape floods.