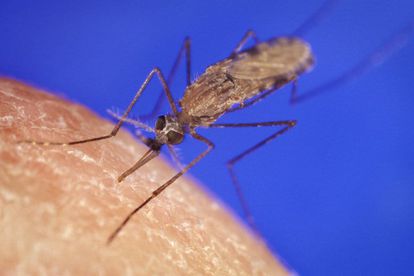 Blood-feeding Anopheles gambiae mosquito. This mosquito is one of the leading malaria vectors in the world. / Photo via CDC/ James D. Gathany, Public Health Image Library

Blood-feeding Anopheles gambiae mosquito. This mosquito is one of the leading malaria vectors in the world. / Photo via CDC/ James D. Gathany, Public Health Image Library

Lariam, known scientifically as mefloquine hydrochloride, is widely used to prevent malaria, yet the medication’s grim side effects have put its prescription under the microscope.

Malaria is an infectious disease that is spread by female mosquitoes that are infected with Plasmodium parasites. While preventative measures, including medical advancements and education surrounding the deadly disease, have managed to lower mortality rates in recent years, the World Health Organisation (WHO) estimates that 212 million people were infected with the disease in 2017, with 429 000 deaths reported.

Mefloquine was formulated at Walter Reed Army Institute of Research (WRAIR) in the wake of the Vietnam War. The malaria drug, which was formulated for prophylactic use, became available to the public in the 1980’s. Yet, in the last decade, mefloquine, which is sold under the brand name Lariam, has been receiving widespread condemnation for a host of shocking side effects.

In fact, many medical practitioners and members of the public have questioned the continued production and supply of Lariam, citing its disastrous effect on users’ mental and physical wellbeing as just cause for a complete ban.

The controversy surrounding Lariam and mefloquine is not new. The drug, which is used to both prevent and treat malaria, was hastily approved by the United States’ Food and Drug Administration in 1989. This dubious endorsement, which was based primarily on compliance, overlooked the medication’s safety and tolerability issues.

In essence, the drug’s effectiveness in combating malaria, at a time when infections and deaths were more common than they are today, blinded doctors, health organisations and the general public to its dastardly side effects.

Lariam: The side effects

While Lariam has been proven to be one of the most proficient medications in halting malaria infections, its side effects have earned it more notoriety than praise.

According to RxList, a trusted online medical resource of prescription medications, Lariam’s side effects are severe and varied.

Physical side effects occurring from the use of Lariam include nausea, vomiting, diarrhea, abdominal pain, dizziness, vertigo and skin disorders. While these physical side effects may be unpleasant, they’re much less dangerous than actual malaria infections, which gives the medication due credence.

However, it’s the mental, psychological and emotional side effects attributed to Lariam and mefloquine which have resulted in public outcry. These serious neuropsychiatric disorders include convulsions, agitation or restlessness, anxiety, depression, mood changes, panic attacks, forgetfulness, confusion, hallucinations, aggression, psychotic or paranoid reactions and encephalopathy.

According to RxList, the use of Lariam, and its subsequent neuropsychiatric side effects, can lead to prolonged depressive episodes and even suicide:

“Mefloquine may cause psychiatric symptoms in a number of patients, ranging from anxiety, paranoia, and depression to hallucinations and psychotic behavior.

As a result of these severe side effects, pharmaceutical suppliers of Lariam have advised persons already suffering from depression or anxiety to avoid using the medication.

And while most individuals travelling to malaria hotspots possess the power of free will to abstain from Larium use, the situation becomes complicated when governments supply the drug to personnel who have little say in the matter. This has resulted in serious complications which have ended up in court.

In 2002, four American soldiers were accused of murdering their wives. Two of the accused committed suicide shortly thereafter. And while the brutal crimes may have been attributed to post-traumatic stress resulting from combat, the accused pointed to psychotic episodes as a result of the use of Larium.

According to a CBS report at the time, the Fort Bragg murders brought Larium’s side effects under the microscope. Following the incident, other soldiers and their wives began speaking out on the side effects of Larium. Despite medical reports detailing the prolonged harmful effects of Larium, the US government denied the correlation between the drug’s use and the Fort Bragg murders.

More recently, Irish soldiers administered Larium during overseas deployment returned home suffering from fierce neuropsychiatric disorders. These soldiers, who were duty-bound to use the drug, have now launched legal proceedings against the Minister for Defence in May 2018.

According to the law firm representing the complainants, 75 soldiers have laid legal complaints against the government for administering Larium. As reported by The Independent, the soldiers are being represented by solicitor Norman Spicer, a former Defence Forces member, who also experienced the adverse effects of Larium while deployed in Chad. Spicer explained:

“I believe it [Larium] to have been administered in such a way that falls below standards which one might expect to receive. A lot of the soldiers I have been speaking to have suffered very badly.”

A former female Defence Forces member taking legal action reported that, following the use of Larium, he suffered from suicidal thoughts, had to seek psychiatric treatment and now has difficulty securing and maintaining full-time employment.

Malaria and Larium in South Africa

Sub-Saharan Africa continues to carry a disproportionately high share of the global malaria burden. In 2015, the region was home to 90% of malaria cases and 92% of malaria deaths.

Naturally, South Africans, especially those in the northernmost parts of the country and citizens travelling to neighbouring nations, are well aware of the risks of malaria.

Larium (mefloquine) is sold as a schedule 4 drug in tablet form in South Africa. For prevention of malaria, it needs to be taken at least a week before entering a risk area to ensure effectiveness. Women who are pregnant/breastfeeding are advised not to use mefloquine.