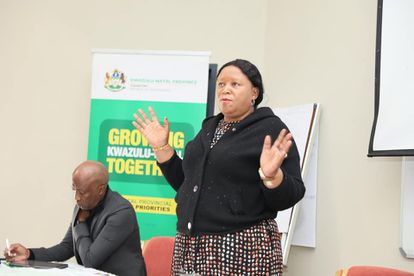 The Premier of KwaZulu-Natal Sihle Zikalala has wished the MEC for Transport, Community Safety and Liaison Neliswa Peggy Nkonyeni and her close protectors a speedy recovery following a vehicle accident outside uLundi today, Tuesday, 21 June.

According to a statement released by the KZN Provincial Government, MEC Nkonyeni and her close protectors were involved in an accident after a tyre burst on the vehicle as they were travelling along the R66.

The MEC had just concluded an earlier engagement between the Premier and His Majesty the King Misuzulu kaZwelithini.

“MEC Nkonyeni was on her way to her next engagement in the Dannhauser Local Municipality, where she was going to launch the youth economic empowerment programme that will see more than 4000 young people employed by the Department of Transport,” the statement read.

The MEC and her close protectors are being treated in hospital.

Premier Zikalala together with the Director-General Dr Nonhlanhla Mkhize, who were among the first people to arrive at the scene of the accident, ensured that the MEC and her protectors were assisted and that they receive urgent medical care.

“MEC Nkonyeni was involved in an accident just after we had concluded a very fruitful engagement with His Majesty the King Misuzulu kaZwelithini to get the Kings guidance on various pertinent matters in the province,” confirmed Zikalala.

“MEC Nkonyeni is currently undergoing complete medical evaluation. She is fully conscious and alert with the Premier and the Director-General by her side at the hospital. We will communicate further on this matter to give an update on the MECs condition. On behalf of the people and government of KwaZulu-Natal we wish MEC Nkonyeni and her protectors a speedy recovery,” said Premier Zikalala.

Premier Zikalala has assured the people of KwaZulu-Natal that the MEC and her protectors were receiving the best medical treatment.