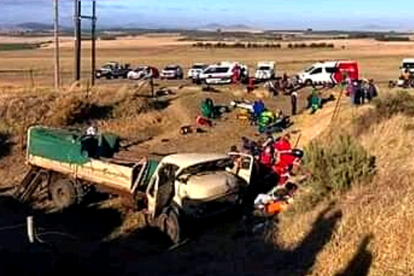 Thirty-five farm workers sustained injuries when a truck overturned on the R45 Klapmuts in the Cape Winelands on Monday.

The farm workers were reportedly travelling to work when the truck tipped on its side. Attending emergency responders from ER24 and the Western Cape Metro Emergency Medical Services (EMS) found numerous occupants on the side of the road.

A few of them were walking about while others sat idle. ER24 spokesperson Russel Meiring said paramedics arrived at the crash site at 07:30 and attended to one seriously injured person. The other farm workers needed only minor treatment.

Meiring said the circumstances of the accident are unknown. Police were on the scene but were not immediately available for comment.

13 Injured in serious collision between taxi and light motor vehicle

Elsewhere, 13 people sustained minor to serious injuries in an accident involving a taxi and a light motor vehicle on the M4 Ruth First Freeway in Durban, KwaZulu-Natal, on 18 June.