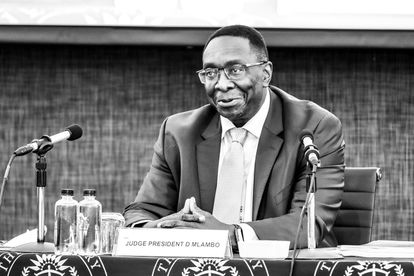 The Chief Justice interviews took a bit of a dark turn when Advocate Dali Mpofu and Julius Malema asked Gauteng Judge President Dunstan Mlambo to clear the air about rumours of him sexually harassing women, including judges.

During his interview, Judge Mlambo spoke at length about his vision for an independent and impartial judiciary and bemoaned the lack of capacity at the courts. Like other JSC commissioners, Mpofu and Malema posed a variety of questions to Judge Mlambo, including on some of his judgements and leadership.

Mpofu, who pointed out that he and Judge Mlambo had spoken about the rumour at some stage, posed the question to him first, noting that if true, such a claim would be an embarrassment to the judiciary and even warrant an impeachment.

Malema asked about sexual favours being supposed asked from women, in exchange for sitting as acting judges in the Gauteng Division of the High Court.

Responding to Malema and Mpofu, Judge Dunstan Mlambo denied the rumour and took issue with the fact that it was mentioned during his interview.

Judge Mlambo told Malema that he has appointed a significant number of women to act in the courts, and thus his (Malema) statement would imply that they engaged in sexual acts with him to advance to the bench, which he said was an insult to both him and those women.

“It’s a rumour and I think it’s an insidious, poisonous rumour. There’s actually no substance to it. When I heard about it I was actually shocked and I was actually hoping that someone would come up and say, ‘I’m one of those sexually harassed by Judge President Mlambo’ so it’s unfortunate that people are using people’s names will-nilly in spreading rumours of this nature”