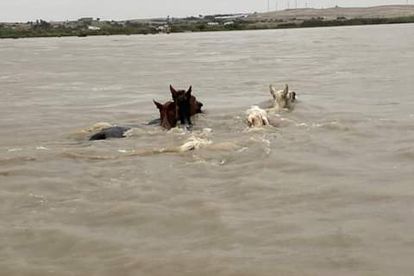 A total of 35 horses were rescued from the flooded Orange River near Alexander Bay on Wednesday.

THE HORSES WERE STUCK ON A NUMBER OF SMALLER ISLANDS

The National Sea Rescue Institute (NSRI) spokesperson Craig Lambinon said the horses were scattered in groups across a number of smaller islands that they had sought shelter on.

“As islands were flooded the horses were forced to swim to the next island, causing the horses to be scattered over a large area, some already standing on islands that had submerged,” he said.

Lambinon said during an intense operation the horses were corralled and walked through chest-deep water and at places swum through the water to reach larger islands.

“We went from island to island, continuing to assist until all of the horses were safe. In total, 35 horses, which included three foals, were assisted to safety.

“Once all horses were out of danger, no further assistance was required, and the operation was completed at approximately 11h00.”

Lambinon furthermore said they were accompanied by members of Have a Heart and Network for Animals was launched.

MEMBERS OF THE PUBLIC ALSO ASSISTED WITH THE RESCUE

“Public members Jacques Kemp, Mark Kemp, Mauricio Smit, and Dewald van Jaarsveld, from the Namibian side of the river, launched their two private boats offering to help to assist in the operation.”

ALSO READ: Dog rescued from an abandoned mine shaft in Boksburg

The National Sea Rescue Institute (NSRI) is the charity organisation that saves lives on South African waters – both coastal and inland. Our goal is to prevent drowning through rescue operations, education and prevention initiatives.

“Operating from base stations along the SA coastline, and on inland dams, our rescue volunteers are on call, at all hours, every day of the year. Our rescue crew receives no payment and neither do we charge the people we rescue,” Lambinon said.